What is the history of elements? Information about the elements in periodic table, isotopes, electron configuration, hybridization, reactivity of elements.

There are 118 known elements. Of these, 94 are found in nature in measurable quantities. The rest have been produced synthetically in laboratories. The elements may be combined into about four million compounds. About 95% contain carbon and are called organic compounds.

Elements are made up of atoms consisting of a very dense center, the nucleus, surrounded at relatively vast distances by electrons. The nucleus contains protons, which are particles with positive electrical charges, and neutrons, which are electrically neutral. Electrons have a negative charge. The mass of a proton and of a neutron is approximately the same, and the mass of each is about 1,840 times that of an electron. Protons and neutrons are held in th1 nucleus by other fundamental particles, such as mesons.

The ancient Greeks held a variety of opinions about the elemental composition of matter. Anaximenes of Miletus (6th century b. c. ) believed that water was the only element, while Empedocles of Agrigentum (5th century B.C.) and Aristotle (4th century b.c.) believed that there were four elements—earth, fire, air, and water. These elements were thought to be related to one another through four qualities—coldness, wetness, hotness, and dryness, which also gave the elements their characteristics. It was thought that one element could be transformed to another by changing the qualities.

Many variations of Aristotle’s theories were devised through the Middle Ages. In the 1500’s, for example, Paracelsus added three principles-sulfur, mercury, and salt—to the four elements. He felt that these principles had to be in balance in the body for good health.

Nine elements were known and used in the ancient world: carbon, copper, gold, iron, lead, mercury, silver, sulfur, and tin. The alchemists separated other elements from their compounds, and before 1600 antimony, arsenic, bismuth, and zinc were identified. Phosphorus was isolated during the 1600’s, while a number of elements, including hydrogen, nitrogen, and oxygen, were isolated in the 1700’s. About 30 elements were known by 1800, and over 80 by 1900.

The modern usage of the word “element” dates from Bobert Boyle in 1661, who described elements as “primitive and simple, or perfectly unmingled bodies; which not being made up of any other bodies, or of one another, are the ingredients of which all those called perfectly mixed bodies are immediately compounded, and into which they are ultimately resolved.”

In order to identify a substance as an element and classify it properly, it is first necessary to be able to separate the element from its compounds. For example, in his list of 33 elements published posthumously early in the 1800’s, the French chemist Antoine Lavoisier included 6 compounds. With the techniques available at the time these compounds could not be broken down into simpler substances. Second, it is necessary to have reliable atomic weights. By the mid-1800’s this was possible through the work of chemists such as Gay-Lussac, Berzelius, Faraday, Dumas, and Prout. Finally, sufficient numbers of elements had to be known so that the relationships between them could be clearly defined. About 60 elements were known in the mid-1800’s, enough to construct a system of classification.

The first real attempt to classify the elements was made about 1826 by the German chemist Johann Wolfgang Dobereiner. With his observation of triads, Dobereiner showed that in certain trios of elements—such as calcium, strontium, and barium—some of the properties of the middle element were predictable in terms of the properties of the other two elements. The elements in each triad were arranged by atomic weight.

In John Newlands’ law of octaves (1863) the elements were ordered according to atomic weight in eight columns of seven elements each. The eight elements of the horizontal rows showed repetitive properties. For example, in Newlands’ table, elements number 8 (fluorine), 15 (chlorine ), and 29 (iodine) are similar, while 22 (cobalt and nickel), 36 (palladium), and 50 (platinum and iridium) are similar. These elements differ by multiples of seven.

In 1869 the Russian chemist Dmitri I. Mendeleyev published his periodic law and table of elements. This table listed elements generally in order of increasing atomic weight. It also separated hydrogen from the other elements by placing it in its own period, and it left blank spaces for undiscovered elements. The table was published with the elements in horizontal rows. Each horizontal row is known as a period, or series; each vertical row is known as a family, or group. The families exhibited similar properties, so much so that Mendeleyev was able to predict the properties of the then undiscovered elements gallium, scandium, and germanium.

Two elements were not placed in the positions indicated by their atomic weights. Mendeleyev insisted that tellurium (atomic weight 127.60) should precede iodine (126.90) and that cobalt (58.93) should precede nickel (58.71). The order in these two cases was based on the properties of the elements. Mendeleyev’s table was based on the fact that the properties of the elements and their compounds are periodic functions of their atomic weights. The irregularities that he recognized were not explained until the 20th century.

In 1914 the English physicist Henry G. J. Moseley bombarded metal targets with electrons. He measured the wavelengths of the X rays produced and discovered a simple, linear, relationship between the square root of the reciprocal of the wavelength and Mendeleyev’s order of the elements. Moseley concluded that this regular increase must be due to the charge on the nucleus, and that it results from the successive addition of one proton to the nucleus in the progression from one element to the next through the periodic table. The number of protons in an atomic nucleus is called the atomic number.

When the elements are arranged in order of increasing atomic number, it is shown that Mendeleyev was correct in instances where he did not follow atomic weight. 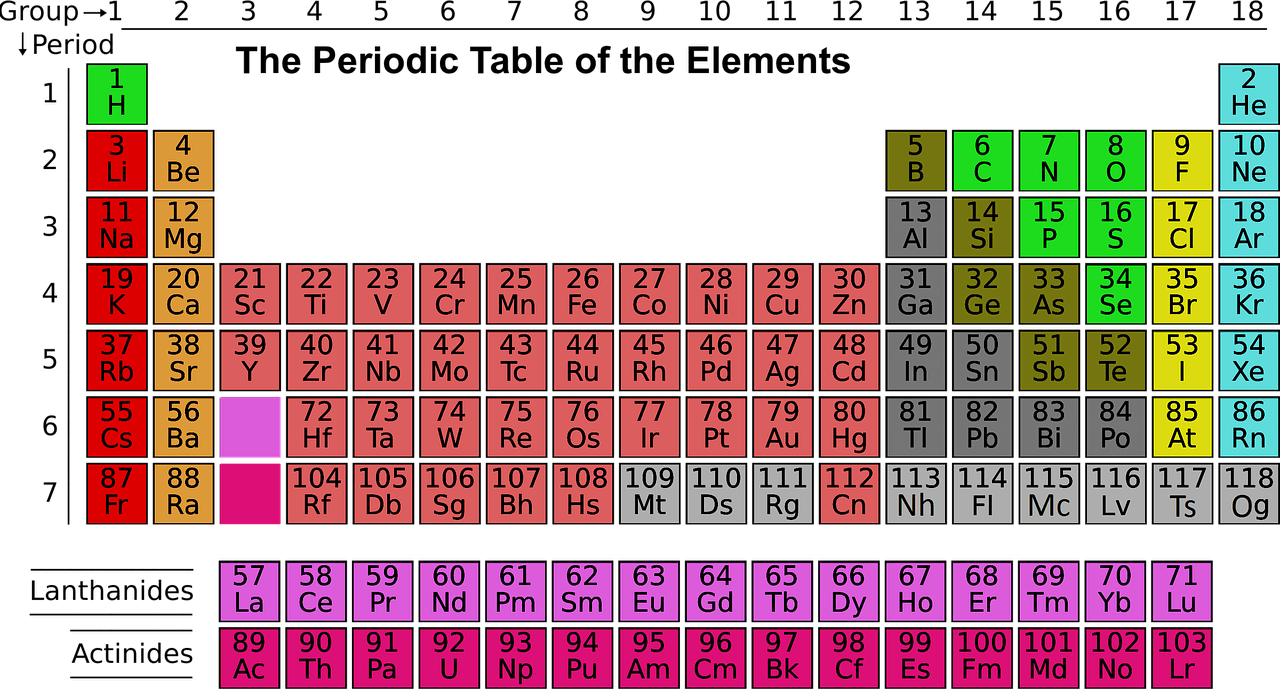 The chemical properties of isotopes are alike, but the physical properties that depend on mass differ. There are 269 stable isotopes that occur naturally and over 900 radioactive isotopes, many of which have been made in the laboratory.

The spin quantum number, s, describes whether the spin of an electron around its own axis is clockwise or counterclockwise with reference to an external standard.

When electrons have identical quantum numbers except for spin, they are said to occupy the same orbital. An orbital may be regarded as a volume of space in which electrons move, and it may have one or two electrons but no more.

The magnetic quantum numbers, as well as the phenomenon known as hybridization, establish the three-dimensional structure of an atom in its compounds. Hybridization results from the tendency of electrons with somewhat different energies in different s, p, d, or f subshells to adopt equivalent energy positions. For example, carbon with its atomic number of 6 should have two s electrons in its first energy level and two s and two p electrons in its second energy level. However, the electrons in the second energy level hybridize so that the energy content of each is intermediate. This is sp3 (one s and three p) hybridization. Because they are all negatively charged, the electrons will repel one another, and the necessary geometrical structure in this case must be a tetrahedron. The angle from the center of a tetrahedron to two of its apexes is 109° 28′. Because of the equivalence of the four sp3 electrons in carbon, this angle is found in the carbon atom, in the diamond, which is pure carbon, and in symmetrical compounds of carbon, such as methane, CH4.

The reactivity of an element depends on a number of factors, including the electron complement in the outer shell (valence electrons) and the size of the atom. The electronegativity scale, which was devised separately by Linus Pauling and Robert Mulliken, rates the elements according to their tendency to gain or lose electrons. The scale assigns a number of 4.0 to fluorine and 0.7 to cesium. The closer an element is to 4.0, the greater its tendency to gain electrons, while the farther removed it is, the greater its tendency to lose electrons.

Elements may be isolated in each of the three states of matter. The state depends on the temperature and pressure.

The noble gases are helium, neon, argon, krypton, and xenon. Because their outermost electron shell is completely filled, they do not normally combine with other elements or even with like atoms. Therefore, there is only one atom per molecule of these gases. Most other gaseous elements contain two atoms per molecule —for example, hydrogen is H» and chlorine is Cl2. Some elements that are solid at room temperature vaporize under certain conditions to form gaseous molecules containing varying numbers of atoms. For example, phosphorus may have four atoms per molecule, P2, or at higher temperatures, two atoms per molecule P2. Sulfur vapor, depending on the temperature, may be S3, S6, or S8.

A few of the elements, such as bromine, Br2, mercury, Hg, and perhaps gallium, Ga, are liquid at room temperature.

The solid elements generally form crystalline structures of various types. The shape of the crystal is directly dependent on the arrangement of the atoms of the element.

Elements may exist in two or more different forms, such as oxygen, O2, and ozone, O3; gray and red selenium; and white and red phosphorus. The phenomenon of different forms of the same element is known as allotropy. The term polymorphism is also used for different crystalline forms of an element.