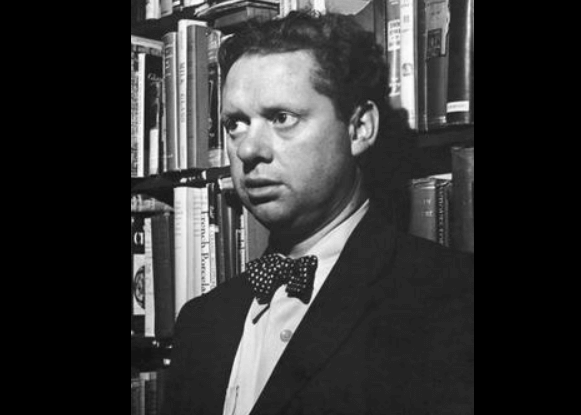 Dylan Thomas; (1914-1953), Welsh poet, whose lyric poems are among the most captivating in 20th century romantic verse. Despite ignorance of his native language, Thomas is perhaps the most Welsh of English poets and reflects his Welsh literary heritage in his concepts, images, moods, and rhythms. Having an extraordinarily sensitive ear and a rich, resonant voice, he wrote and read poetry with an unforgettable auditory appeal. He was one of the few modern poets to have gained his first audience through readings—on British Broadcasting Corporation programs, Caedmon recordings, and lecture tours—and only later through printed poems.

Dylan Marlais Thomas was born in Swansea, Wales, on Oct, 27, 1914. From his father, a cultured man and would-be poet, he inherited his intellect and literary abilities, and from his mother, a simple and religious woman, his generosity and Celtic sentimentality. His formal education ended at Swansea Grammar School, where he was undistinguished except for his contributions to the school magazine. He supported himself briefly as a journalist and was intermittently an amateur actor. By 1934 he originated—in style or concept if not in composition—more than half his literary output.

Thomas published his first book, Eighteen Poems, in 1934, then moved to London, where he published his second, Twenty-five Poems, in 1936. By this time he had won acclaim from the poet Edith Sitwell and others, who praised the variety and originality of his poetic experiments.

Thomas had gained immediate recognition but not wealth, and after his marriage in 1937 to Caitlin Macnamara, his responsibilities as husband, and later as father of three children, rendered more acute his need for money. He wrote radio scripts for the ministry of information and documentaries for the British government. Then, on four lecture tours through America, he gave more than 100 poetry readings. But dissipation and a grueling schedule hindered his literary output, and he published little poetry in his later years.

Thomas’ early conviction that he had only a few years to live and his considerable talent as an actor led him to create “instant Dylan”—the persona of the poet as he thought the public expected him to be. First he assumed the pose of the “consumptive poet” doomed to die young. Later he played the role of the wild Welsh bard damned by women and drink. On Nov. 9, 1953, he died in New York City at the age of 39 of pneumonia superinduced by acute alcoholism.

Passionately dedicated to his “sullen art,” Thomas was a competent, finished, and sometimes intricate craftsman, as the approximately 200 versions of the poem Fern Hill attest. His artistry progresses from the early poems, which are relatively complex and obscure in sense and simple and obvious in auditory patterns, to the later poems, which are simple in sense but complex in sounds. Some of the few poems written in his last years are excellent examples of his “moments of magical accident,” and thus memorable for their pathos of reminiscence that re-creates through the eyes of the adult the innocence of the child.

Thomas’ best poetry is found in Eighteen Poems, Twenty-five Poems, The Map of Love (1939), Deaths and Entrances (1946), and In Country Sleep (1952). The autobiographical sketch Portrait of the Artist as a Young Dog ( 1940), the unfinished novel Adventures in the Skin Trade (1955), and the witty play Under Milk Wood (1954) are among his best prose works.