What is a gull? The description of gull. Information on behaviors, breeding, classification and types of gulls.

Gull; any of a genus of long-winged scavenging seabirds that inhabit seacoasts and large inland bodies of water. The approximately 43 species of gulls are found on all continents from the icy coasts of Antarctica to the tropical islands near the equator. They are seldom seen out of sight of land unless they are blown out to sea in storms. A few species breed on remote oceanic islands. Gulls are closely related to terns but are larger and heavier; they are also related to skuas and jaegers. 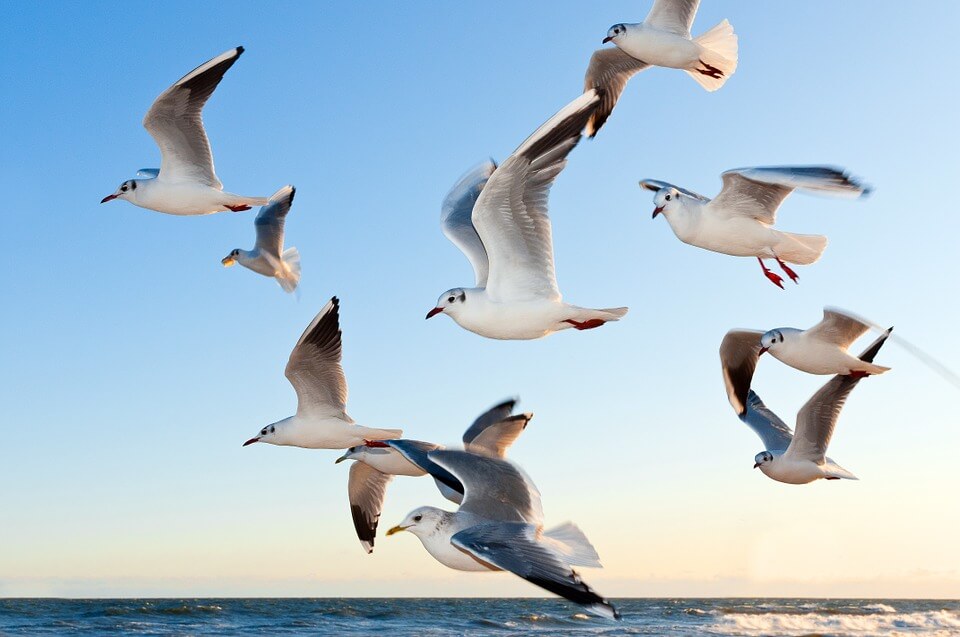 Gulls are 8 to 30 inches (20-76 cm) and have stout bodies and pointed wings. The bill is stout and slightly hooked, and the three front toes are webbed. In most species the tail is square when closed and rounded when fanned, but in two species it is forked and in one it is wedge-shaped. Females are usually smaller than the males, but the sexes are alike in coloring.

Generally, the gull’s body and tail are white. The back and wings are light or dark gray, and the wing tips are usually black, with a contrasting white pattern that serves as an identifying characteristic. The bill is red, yellow, or black, generally with a spot of a different color near the tip. The head is either white or, during breeding season, has a dark hood. The legs are yellow, dull green, flesh-colored, red, or black. The color of the legs and the bill varies with age and the season of the year. Immature gulls are grayish brown, mottled with white or buff, and usually have a black band on the end of the tail. Larger species take three to four years to attain adult plumage.

Gulls fly with slow, rhythmic wing beats and are capable of extended soaring. Gulls are characteristically seen swimming, but they cannot dive deeply. They can also walk and run with agility. They are gregarious birds, and their ringing, laughing calls are familiar seaside sounds.

Gulls eat a variety of animal and plant matter. Although they are capable of catching live fish, crustaceans, and other invertebrates at sea, they generally are coastal scavengers. They characteristically follow ships to take advantage of discarded galley scraps or offal from fishing vessels. Flocks gather to feed at refuse heaps. Gulls also follow farmers in newly plowed fields to catch exposed insects and worms; they also pick up surplus grain in harvested crop fields.

Some species of gulls have evoloved ingenious methods of food getting. The great black-backed gull (Larus marinus) and the glaucous gull (L. hyperboreus), for example, drop mollusks on hard surfaces to break open shells. Gulls may also steal eggs from other gulls’ nests and eat them. 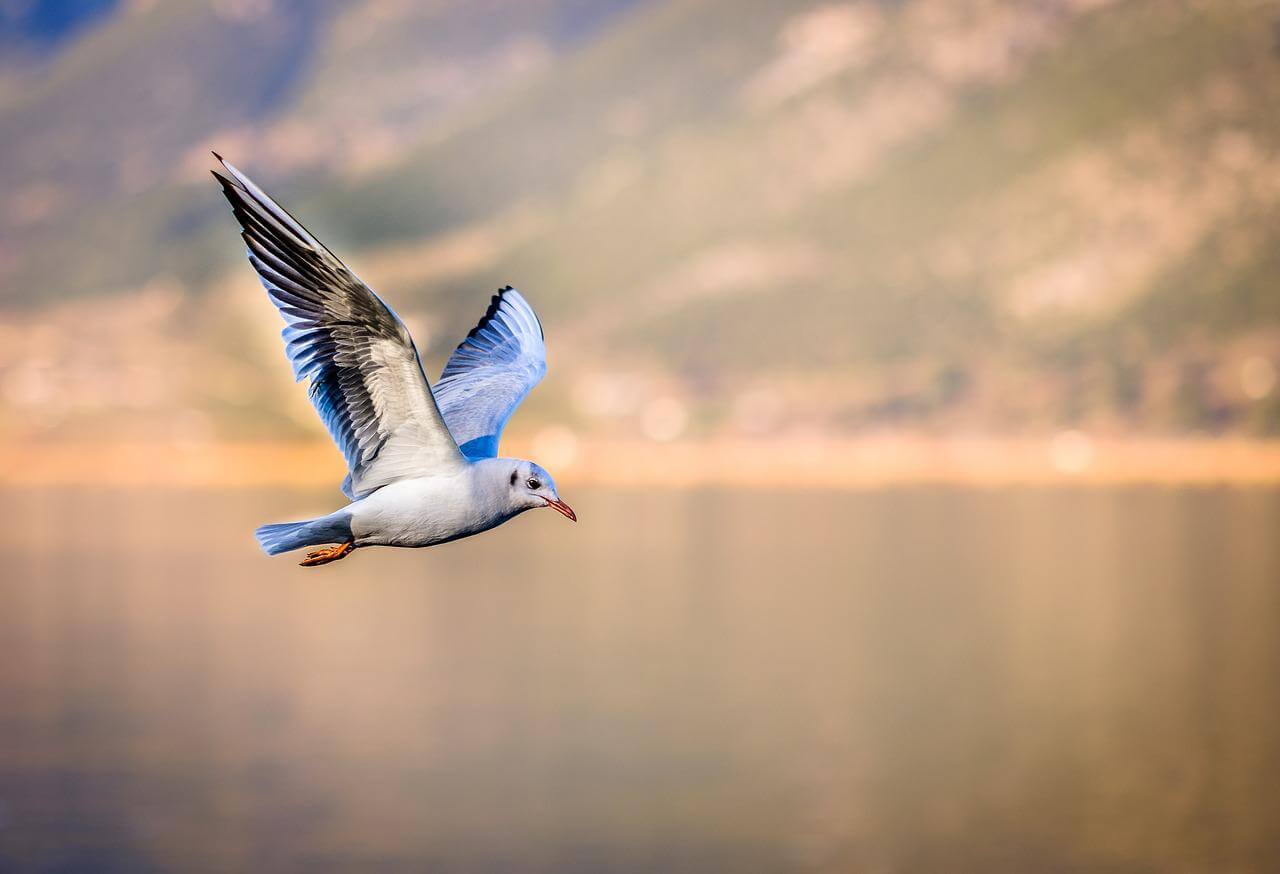 Gulls nest in loose colonies on small rocky islands, isolated headlands, inaccessible cliffs, or in grassy marshes. The nest is a bulky structure of grass stems, seaweed, feathers, and discarded food, usually built on the ground but occasionally floating.

The tan, brown, or green eggs, usually 2 or 3, are spotted and blotched with black. If the eggs are removed, some females will continue laying as many as 15 eggs. Both parents incubate the eggs for at least 20 days.

Both parents also care for the downy tan chicks. The chicks are able to walk very soon after hatching but stay near the nest for at least a month until they are almost ready to fly. While near the nest, they are fed by both parents. The mortality rate for young gulls is high. One species, the swallow-tailed gull (L. furcatus) found in the Galápagos Islands, feeds its young at night, perhaps to escape piracy by predatory frigate-birds.

Classification and Types of Gulls:

Gulls fall into three natural subgeneric groups on the basis of their morphology and behavior. One large diverse group, the hooded gulls (subgenus Xema), have black hoods during the breeding season but molt to mottled gray head feathering during the off season. The “primitive” hooded gulls include the laughing gull (L. atricilla) and Franklin’s gull (L. pipixcan) of America and the sooty gull (L. hemprichi) of the northwestern Indian Ocean. Examples of the more advanced “masked” hooded gulls are the Old World and South American black-and-brown hooded gull group (L. ridibundus-brunnicephalus-maculipennis). Two hooded species, Heer-mann’s gull (L. heermanni) of California and the gray gull (L. modestus) of western South America are completely gray with white heads. The pelagic kittiwakes (L. tridactylus and L brevirostris) have black heads only when they are immature. 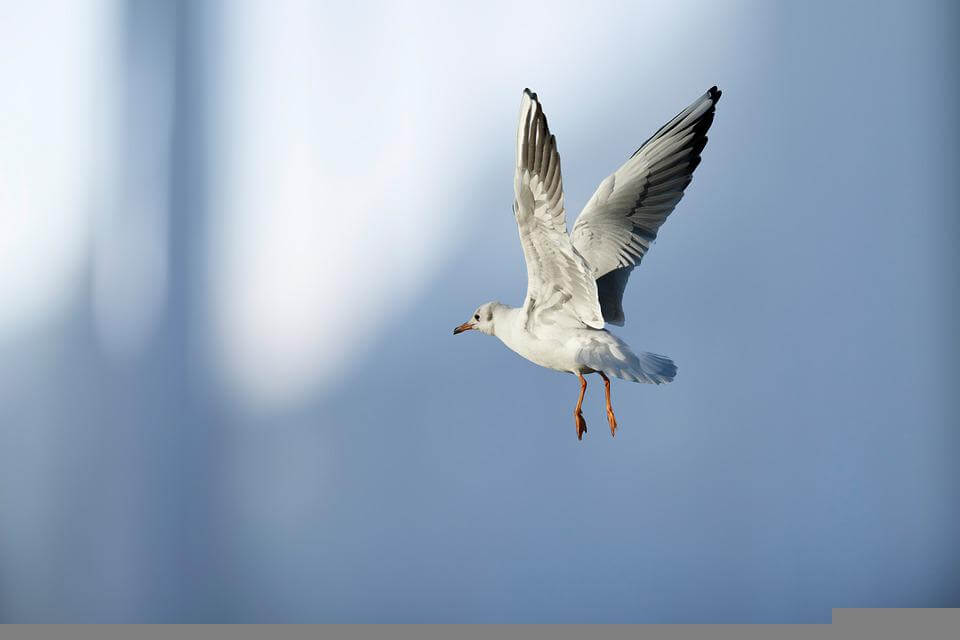