Chilomastix mesnili is a protozoan that belongs to the group of flagellates. It parasitizes the digestive tract of human beings, specifically the colon, without causing any type of pathology.

It was first observed by the French physician Casimir Devine, who in the first instance named him Cercomonas intestinalis. Subsequently, the genus Chilomastix was created to include organisms with these characteristics.

The Chilomastix mesnili is a very well known protozoan, which has been studied sufficiently, especially its characteristics and behavior within the human intestine. Because of this, it has been established that it poses no threat to its host. 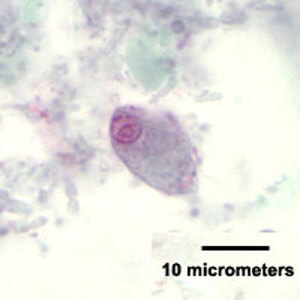 In this type of organism only the type of asexual reproduction is observed, which does not require the fusion of sexual cells.

The asexual reproduction method of Chilomastix mesnili is binary fission. In this process, the first thing that happens is DNA duplication. Subsequently the cytoplasm of the cell is divided following the longitudinal plane, originating two cells, each of which is exactly the same as the cell that gave them origin.

Chilomastix mesnili is a heterotrophic organism, which means that it is not able to synthesize its own nutrients. It is fed through phagocytosis, a fairly common process in protozoa. Through this process, alimentary particles from the digestive tract enter the cell through the cytostome to be processed and assimilated.

It is innocuous
In general, Chilomastix mesnili is a protozoan that does not represent any risk to the health of its host, since it does not cause intestinal imbalances.

On very rare occasions it can cause some discomfort, this being related both to the number of parasites in the intestine, and to the immune status of the host.

The Chilomastic mesnili, during its life cycle can be found in two forms: cyst and trophozoite. Each one has a totally different morphology.

It represents the infectious form of this protozoan. Seen under the microscope, it can be seen that the cysts are uninucleated, that is, they have a single nucleus. This nucleus is large, compared to the size of the cyst, occupying much of this. They are surrounded by a thick and resistant wall.

It has an oval shape, similar to a pear or a lemon and on its surface an anterior hyaline protuberance is observed. They measure on average between 6-10 microns in length and 4-6 microns in width. They are also colorless. They do not present cytostoma or flagella.

It is the vegetative form of the protozoan, that is, the one that reproduces and feeds. It has a pear shape. It measures approximately between 11-16 microns. The cytoplasm is prominent, surrounded by microfibrils. It also lacks mitochondria and Golgi apparatus. It presents a core of spherical shape that measures on average between 3-4 microns; This is not visible when fresh preparations are made.

Likewise, under the microscope it is possible to observe the presence of several flagellae (4), one of them being associated with the cytostome, which is a kind of opening through which the food particles enter the protozoan. The trophozoite has a characteristic rotary movement.

The life cycle of Chilomastix mesnili is monoxenic. In this type of cycle, the parasite needs only one host for its full development. In the case of this protozoan, the host is the human being.

It is important to note that this protozoan is a commensal of the large intestine of humans and other primates. This means that it lives there, at the expense of the bacteria that are part of the bacterial flora, but without generating any type of damage to the host.

It is at the level of the caecum (large intestine) where the trophozoites develop, reach their adult stage and reproduce, generating the cysts. It is important to remember that these are the infecting form of the parasite.

When they are ingested by some other host, they are again lodged in the large intestine, where they proceed with their development to become trophozoites and again generate other cysts, continuing from this menare the biological cycle.

The Chilomastix mesnili is a protozoon considered harmless to humans. However, when your levels in the large intestine are elevated, it is possible that it may cause some intestinal-type discomforts.

The most frequent form of transmission is from person to person by the oral fecal mechanism. This involves the ingestion of food or water contaminated by fecal particles with parasitic cysts.

Chilomastix mesnili is a protozoon that regularly inhabits the large intestine of approximately 15% of the world population. In general, it is not pathogenic, that is, it does not cause any kind of damage or discomfort.

However, in certain cases, when the number of parasites increases abnormally, it is possible that a clinical picture compatible with a diarrheal intestinal infection is present. Among the symptoms that have been observed more frequently can be counted:

As with any intestinal parasitic infection, the first diagnostic method is a stool test, in which the infecting forms (cysts) of the parasite can be visualized through the microscope.

It is important to note that performing a single test with negative results does not exclude infection. That is why it is necessary to perform serial exams to increase sensitivity and thus reach an accurate diagnosis.

Also, there are other techniques that seem to have a greater sensitivity in this type of diagnosis. Among these are mentioned:

It is a sedimentation type procedure that is based on the use of low density liquids. Through this process, it is possible to recover the parasitic cysts that are deposited at the bottom of the container because its density is greater. In this method, the formalin / ether or methyl acetate combination can be used as reagents.

This method employs zinc sulfate as a reagent. By having this substance a density greater than water that mixes with feces, allows the parasitic forms (cysts, eggs or larvae) to float and in this way can be identified with the help of a microscope.

Taking into account that Chilomastix mesnili is a parasite that in the vast majority of cases does not cause any type of pathology in man, there is no specific treatment to treat it.

However, in those cases in which it triggers some symptomatology, doctors decide on medications that have a clear antiparasitic effect of broad spectrum, such as metronidazole.

The methods of prevention are the same as those applied in other diseases caused by intestinal parasites. These consist in avoiding the contamination caused by the feces containing parasitic forms. Among the most relevant and common measures is to wash your hands after going to the bathroom and before preparing any food.