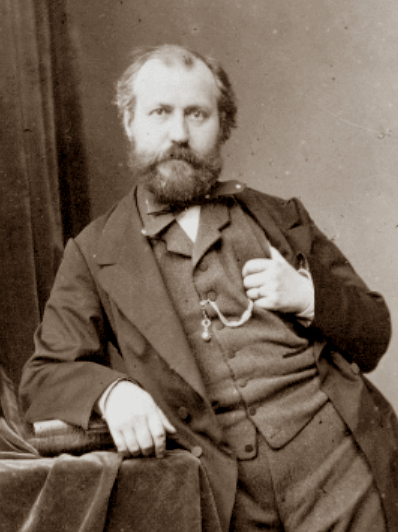 Charles François Gounod (1818 – 1893). Few operas are so often performed or are so familiar as Faust by the French composer Gounod, who was born in Paris in 1818. He was first taught music by his mother, who was a fine pianist, and when he was 18 he studied at the Paris Conservatoire where he won an important musical prize which enabled him to go to Rome to continue studying. This inspired him to write some masses for the church, and, being a religious man, he thought of becoming a priest. However, he never did so, although he studied theology (religion) for a time on his return to Paris.

He saw that writing opera was likely to bring him most success in Paris, and he wrote severa] before Faust was produced in 1859. This based on the play by the great German writer Goethe about the scholar Faust who sold his soul to the devil (Mephistopheles) in order to become young again and win the beautiful Marguerite.

At the end of the opera, Faust is carried away to hell, while Marguerite ascends to heaven. (There is a separate article Faust, Other operas Gounod wrote were Philemon et Baucis, which tells a story from Greek mythology, and Romeo and Juliet, based on Shakespeare‘s play of the same name.

A popular work of Gounod is his “Meditation on Bach’s First Prelude“, to which are sung the words of Av e Maria (the prayer beginning “Hail Mary”), Gounod spent some years in England, where he formed a choir which eventually became the Royal Choral Society. Two of his oratorios, The Redemption and Mors et Vita (“Death and Life“), were first performed at the Birmingham Festivals of 1882 and 1885. He also wrote the tune of the hymn “There is a green hill far away“.