What are the characteristics and structure plant like protists known as algae? Information on unicellular and multicellular algae. 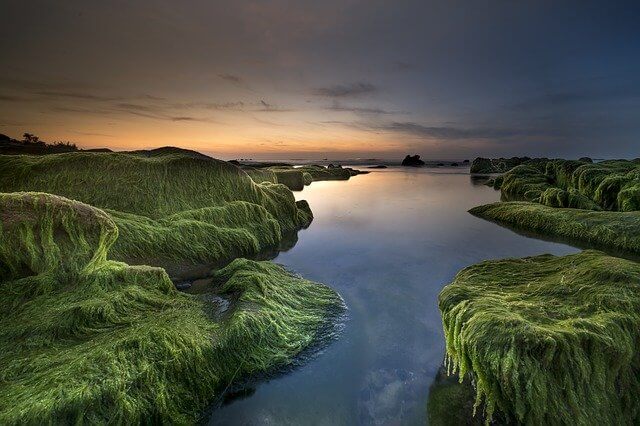 Many of eukaryotic organisms contain the photosynthetic pigment chlorophyll and are able to produce their own food when enough light is available. Many of them are highly motile. Plantlike protists are called “algae”. There are seven major phyla in this group of protists, and they can be classified into two major groups initially according to their being unicellular or multicellular.

STRUCTURE OF A EUGLENA

Euglena that lives in ponds and streams has an oval or pear shape, and a flagellum. They actually possess the characteristics of both plants and animals. They include chloroplast; by means of which they can produce their own food when light is available. But because they can act as heterotrophs, and they have flagella for movement, they are classified as animal like protistant.

Each Euglena has a bright orange- red spot (so called eyespot) near the flagellum. The eyespot helps the cell to move toward light. Light is important for most species of Euglena, because for synthesizing food molecules, light is required.

There is a large nucleus containing nucleolus near the center of the Euglena cell. It reproduces by cell fission. Under suitable conditions, it divides about once a day. Great numbers of Euglena makes the rivers and the ponds look green. 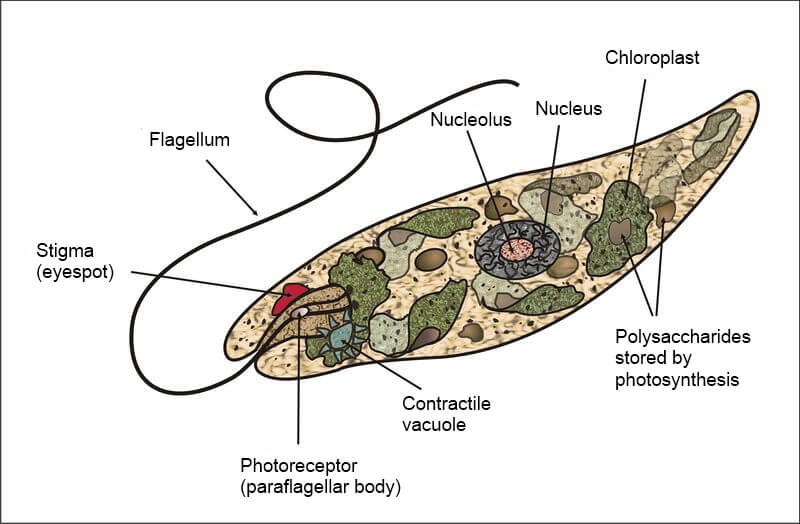 This phylum includes the yellow- green algae and golden- brown algae. The name “Chrysophyta” means golden colored plants. The reason for giving the group this name is that they include yellow color pigment in their chloroplasts. They store food in the form of lipid rather than starch. They are unicellular organisms, but some species can form thread like colonies.

The name of this phylum is “Bacillariophyta”. They produce thin cell walls including Si, the main component of glass. They mostly live in fresh water or cold oceans. They include photosynthetic pigments and are among the main primary producers in the ocean life.

The name of this phylum is “Pyrrophyta”, meaning fire plants. They are luminescent, and give off light when stimulated by sudden movements of the water they live in. Not all Dinoflagellates are photosynthetic, gome are heterotrophs. They have two flagella.

In nutrient enriched sea water, some species may undergo a great increase in the number of members in the population. Vast numbers of algal cells make the water seem red or brown, a condition called “the red tide”. Some of these species are highly poisonous, and may accumulate in the tissues of marine animals. When these animals are consumed by human beings, the toxins may cause severe damages.

Red algae are members of the phylum “Rhodophyta”, meaning red plants. They have a great ability to absorb light energy, and this is why they can live in deep sea water. They include chlorophyll and reddish color pigment phycobilin. This pigment is so efficient in absorbing light energy that members of this group can live from the ocean surface to 260 m deep.

Red algae do not have flagella and centriols. They also play an important role in the formation of coral reefs. They provide the coral animals with nutrients, and give them calcium that they need for reef formation.

Brown algae are members of the phylum “Phaeophyta”, meaning dusky plants. They include chlorophyll and Brown color pigment fucoxantihn.

The largest known algae are the giant kelps, brown algae that can grow to more than 60 meters in length.

Green algae are members of the phylum “Chloropyhta”, meaning green plants. They are very similar to plants by means of their having chlorophyll, cellulose cell wall and storing their food in the form of starch. They are thought to be the ancestors of today’s highly developed plants, but because they do not form fossils, scientists cannot definitely be sure of this idea.