Who is Cato the Elder? Information about the famous Roman statesman, Cato the Elder, who also made great military, political and literary contributions.

Marcus Porcius CATO; (234-149 b. c.), Roman statesman, also known as Cato the Elder or Cato the Censor, who made important military, political, and literary contributions to Rome. Born in Tusculum of a plebeian family, he went to Rome and sought public office at the request of his patrician neighbor and future patron, L. Valerius Flaccus, who had been greatly impressed by Cato’s many abilities and moral character.

Cato was elected quaestor for 204 and went to Sicily. Subsequently, he was elected plebeian aedile (199) and then praetor (198). He held the consulship in 195. In 184, Cato was elected . censor, sharing the office with Valerius Flaccus.

Cato fought in the Second Punic War (218— 201), and he later volunteered for service in the First Syrian War (192-189). He was instru-mental in defeating the fprces of Antiochus III at Thermopylae in 191, when the Roman force turned the pass and defeated the enemy. 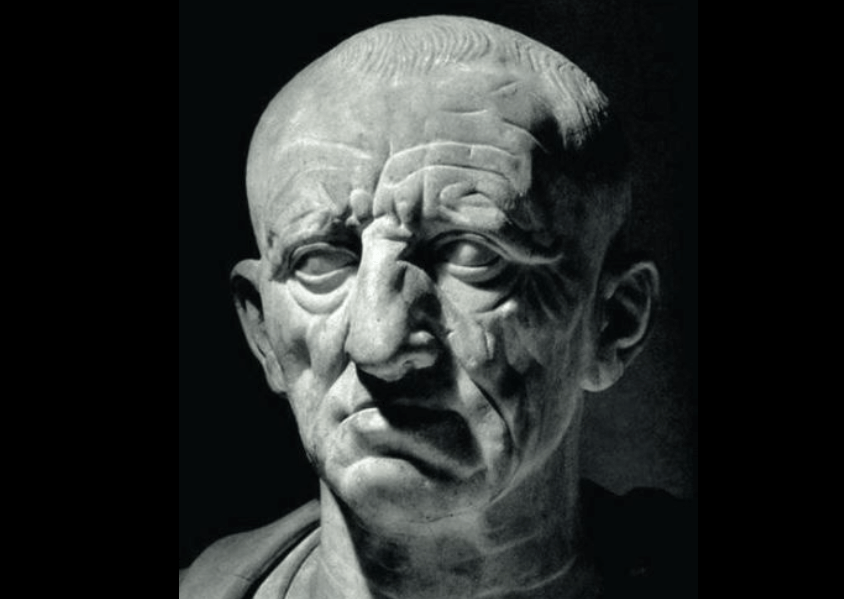 Cato was an intensely na-tionalistic, proud Roman who distrusted things Greek and hated the lıucury-loving attitude that was taking över Roman life. In 195 he opposed the repeal of the wartime law (Lex Oppia), which rationed possession of silver plate and jewelry, and as censor he taxed heavily the dress and ornaments of women of fashion, as well as vehicles and slaves. He humiliated enemies by removing them from the Senate on moral grounds. Cato also attacked the Scipionic circle and its adherents, who were most responsible for the Hellenization of Roman character. He attacked his former commander in the Syrian War, M. Acilius Glabrio, friend of the Scipios, for mis-appropriation of funds, costing Glabrio the censorship he sought (189). Cato then brought a similar charge against Lucius Scipio, brother of Scipio Africanus. The latter countered by de-fiantly tearing up the account books and as-serting his and his brother’s proper behavior (187). Cato pressed on during his censorship: Lucius was oıdy saved from a prison term by a tribune’s veto; and Africanus, accused of treason-able deaüngs with Antiochus, freed himself of the charge, but in doing so lost influence, then retired in disgust from the city, and died within the year (184).

Cato was the most successful, influential spokesman for the archconservative and nationalistic element in Rome, but in his fight against foreign ideas and influences, he waged a losing battle. Romans were greatly impressed by the highly sophisticated Eastern peoples, especially the Greeks, and the upper classes increasingly grafted onto Roman culture the manners and customs as well as the leaming of these peoples.

In his literary pursuits Cato was equally hostile to Hellenism and what he considered the moral degradation of his day. He is regarded as the father of Latin prose because, contrary to earlier practice, he wrote in Latin instead of Greek and made it fashionable. His Origines, in 7 books, was designed to cover the history of ali Latin cities, including Rome, beginning with the time of the kings. Cato’s work exalts the aristocracy, shows an obvious antidemocratic bias, and emphasizes the virtues of traditional Roman character. He was determined to show that Rome’s heritage was as illustrious as that of the Greeks and that the Romans did more with their heritage. Of Cato’s speeches, fragments of about 80 of the original, 150 have survived. For the edification of his eldest son, Cato wrote an encyclopedia, which included essays on agriculture, medicine, rhetoric, military science, and law. Cato’s only extant work is De agricultura (Conceming Agriculture), which, written in his archaic ana simple style, indicates many old Roman customs and superstitions and insists upon the value of hard work and the ancient virtues.

Cato is perhaps best remembered for his oppositîon to the Carthaginians. After the defeat of Hannibal in 202 he carefully watched the developments in Carthage and was quick to support its Af rican foes. Sent as a member of a senatorial commission to Carthage in 153, he was alarmed at the recovery of the city, which, although militarily no longer a rival of Rome, was rapidly becoming a threat economically. Hereafter, Cato, when speaking upon any subiect whatsoever, ended his speech by saying, ‘In my opinion Carthage ought to be destroyed.” Ironically, he supported Scipio Aemilianus’ command in the third Punic W ar (149-146), though Aemilianus belonged by adoption to the Scipio family that Cato had prosecuted. Cato did not live to see the city razed.