What is castration? Castration definition, reasons, age for castration and methods. Information on castration.

Castration; is the removal of the testicles, or sperm-producing organs, from the male. The term “castration” is also used sometimes to denote the removal of the ovaries from the female, but ovariectomy and spaying are the preferred terms for this procedure. After castration, stallions are known as geldings, bulls as steers, boars as barrows, and rams as wethers.

Many reasons are given for castrating animals: (1) It may be used to sterilize males to prevent propagation of undesirable characteristics and thus facilitate selective breeding. (2) It permits males to be housed together without fighting, and males and females to be housed together without reproducing. (3) It changes the disposition of the male and makes him easier to handle. (4) It enables meat-producing animals to gain more flesh than noncas-trated animals. (5) It retards the development of secondary sexual characteristics and causes changes in some internal organs. (6) It permits the normal continuation of life when the testicles are diseased or contain tumors. 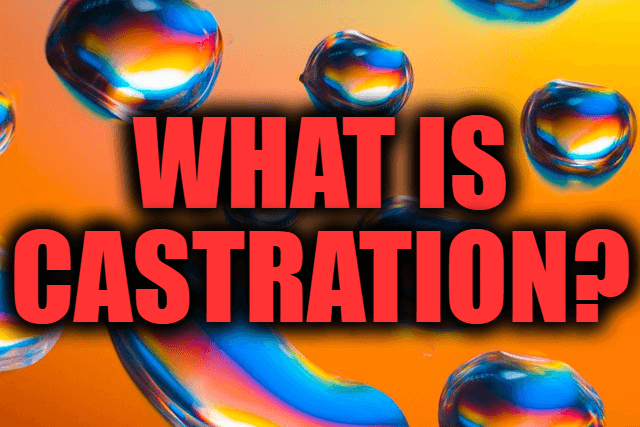 The age at which animals are castrated varies with the species. Colts are usually castrated at one or two years of age, depending on their intended use and the degree of muscular development or other characteristics desired. Calves are frequendy castrated between 6 weeks and 4 months of age, lambs and pigs between 2 and 6 weeks, and dogs and cats between 6 and 12 months.

The methods used for castrating animals vary with the species. Surgical removal of the testicles is the method most commonly used in horses. The surgery, under anesthesia, may be performed when the animal is standing or in a recumbent position. Pigs, calves, and lambs are also castrated surgically, but other methods may be employed. In the western United States, range calves and lambs are frequently castrated by the application of rubber bands above the testicles. This causes a cessation of the blood supply to the testicles, and the testicular tissue drops away after a period of time. Occasionally, however, tetanus or lockjaw results from the use of rubber bands. A third method of castration employs the emasculatome, an instrument that cuts the spermatic cord leading from the testicles and decreases blood circulation to the testicles. This causes the testicles to shrink and become nonfunctional.