Who is Cassiodorus? Information on Cassiodorus biography, life story and works.

Cassiodorus; (c. 490-c.580). Roman official under the Ostrogothic kings and important literary figure of the 6th century a. d. Cassiodorus (Flavius Magnus Aurelius Cassiodorus Senator) was born in Scylacium (modern Squillace) in southern Italy no later than 490 a. d. Of noble Roman ancestry, he followed the path of his grandfather and father to high public office. In early youth Cassiodorus was appointed quaestor when his oratorical and literary talents were brought to the attention of the illiterate Ostrogothic emperor, Theodoric. In this office he attended to the diplomatic, legal, and judicial correspondence that went out over the emperor’s signature.

Honored with the consulship in 514, Cassiodorus subsequently became Theodoric’s master of the offices (chief of the imperial civil service). In 533, after the death of Theodoric, he was elevated to the post of praetorian prefect at the apex of the judiciary. With the decline of the Ostrogoths and the occupation of Italy by the armies of the Byzantine emperor Justinian I, Cassiodorus retired from public life just before 540 in order to found and preside over a new monastery called Vivarium, which was located on his family estate in southern Italy. He lived to be more than 90 years old; 580 a. d. would therefore be the approximate date of his death. 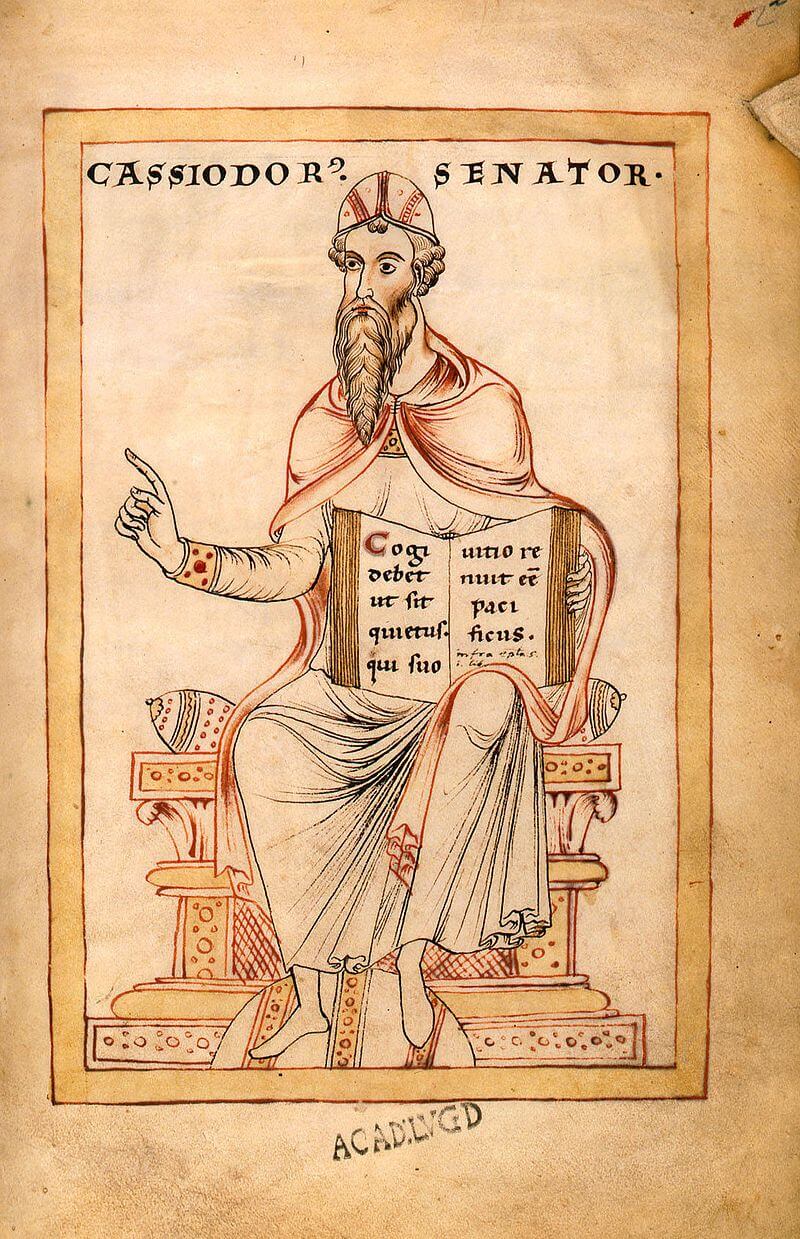 Most of what is known about Cassiodorus is derived from his own voluminous writings. He was a trained rhetorician (not exactly a recommendation in this period), and his style has been condemned as being bad and consisting of “sentence after sentence of verbose and flaccid Latin.” Moreover, like many Westerners of this time, his knowledge of Greek was slight and demonstrably inadequate.

As a historian, Cassiodorus composed a Chronicle and a History of the Goths. The former, which has been preserved, covers the history of mankind from Adam to 519 a. d. in brief annalistic form. Based on the chronicles of the Christian scholars Eusebius and Prosper, it was carelessly done and is completely without merit. The Gothic history in 12 books was a much more pretentious work, but it has not survived. It is known today only in the condensation, presumably inferior to the original, that was made later by Jordanes.

Before retiring to his monastery, Cassiodorus wrote a short philosophic treatise, On the Soul, and edited what is probably his most important and certainly his most interesting work, the Variae. Again arranged in 12 books, this is a collection of letters written by Cassiodorus himself in the names of Theodoric and other Ostrogothic rulers. It also contains certain form letters of appointment describing the duties of the office to be held.

In the second half of his life Cassiodorus devoted himself to a new kind of literary activity and became the “father of literary monasticism.” He and his monks occupied themselves with copying, and thus perpetuating, manuscripts, both Christian and pagan. Cassiodorus also wrote commentaries on the Psalms and on the letters of the apostles as well as a 2-part treatise on the Scriptures and the liberal arts, including grammar, rhetoric, logic, and mathematics. He was past 90 when he put together his last little book, De orthographia. This was a treatise on spelling, compiled from the works of 12 earlier grammarians, which Cassiodorus prepared at the request of his monastic scribes.