What does Caryatid mean? What is the definition of Caryatid? Information about Caryatid examples, uses and history. 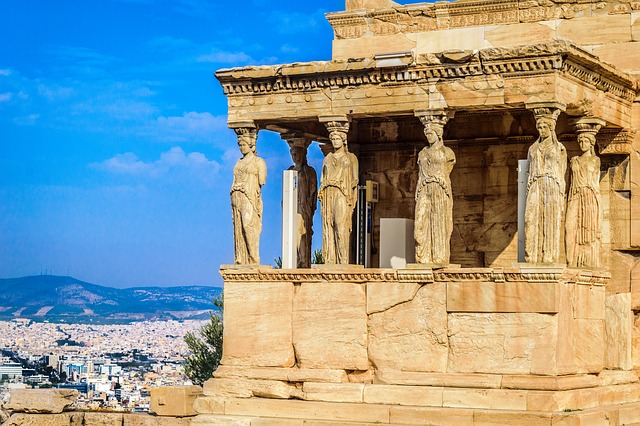 CARYATID, an architectural support in the shape of a female figure. Such figures, though not limited to human dimensions, generally adorn buildings or parts of buildings that are small. A 40-foot (about 12-meter) column is not unusually tall, but a caryatid of this height would give an effect of colossal size. A male figure used similarly is called an atlas (plural, atlantes).

The earliest extant example of the use of caryatids to replace columns is in the porch of the Treasury of the Siphnians at Delphi. They stand on pedestals and bear cushionlike moldings and an abacus (square plinth) on their heads to support the entablature. The patterned drapery, bulging eyes, and frozen smile of these caryatids are typical of archaic Ionian sculpture of the late 6th century b. c.

The most famous caryatids are those on the south porch of the Erechtheum on the Acropolis in Athens, dating from the late 5th century b. c. These six figures support ovolos, or quarter-round moldings, and an abacus that serves to hold the entablature.

Because human figures supporting a heavy architectural load may, through empathy, induce weariness in the observer, it was perhaps to minimize this effect that the frieze, normally the middle third of the entablature, was omitted from the south porch of the Erechtheum. Each figure carries her weight primarily on one leg, with the other leg bent at the knee. The figures on the west half of the porch bend their left knees; those on the east half, their right knees. The straight, or supporting, leg is thus always toward the outside—a detail that helps to give an effect of stability. In style, these caryatids show the influence of the sculptor Phidias in their sturdiness and grace and in the broad idealism of both figure and drapery. Five of the caryatids are original; the sixth is a cast of the figure in the British Museum, London. 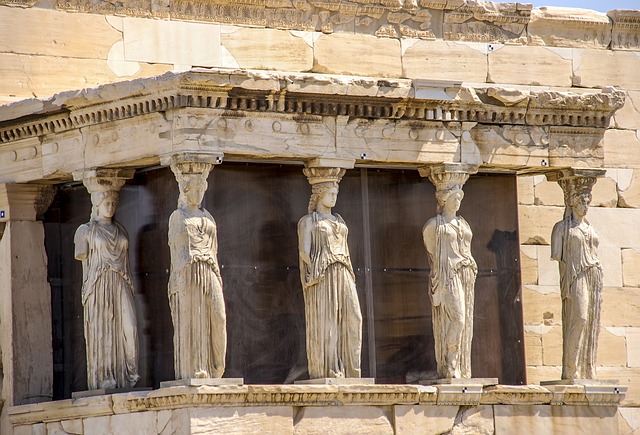 Jean Goujon, foremost French sculptor of the early 1500’s, used caryatids to support a balcony inside the Louvre. He probably did not know the Athenian work, but his architectural instinct led him to carve figures of comparable character.