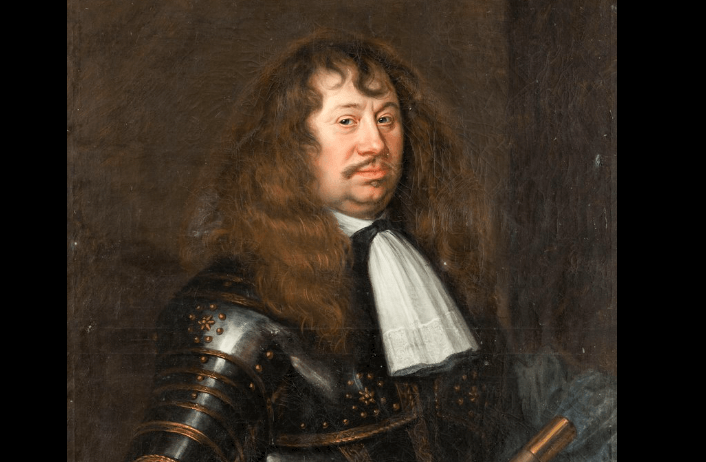 Carl Gustaf Wrangel; Swedish general: b. Skokloster, on Miliaren, Sweden, Dec. 13, 1613; d. Spieker, Rügen, June 25, 1676. He rose rapidly in the army to the rank of lieutenant colonel and distinguished himself in the Thirty Years’ War, in the course of which he was made colonel (1636) and major general (1638). He contributed notably to the Swedish victory at Wolfenbüttel (1641) and, under Lennart Tors-tenson, took part in the Second Battle of Leipzig (1642).

In 1644, Wrangel was placed in command of the Swedish fleet, defeating the Danes in a battle between the islands of Fehmarn and Lolland (Laaland). Appointed field marshal of the Swedish armies in Germany in 1646, he joined forces with the French in an attempt to break the resistance of Maximilian I of Bavaria and succeeded in forcing upon the elector the Truce of Ulm (1647). With the French, Wrangel defeated the Austrians and Bavarians at Zusmarshausen (1648), but his operations during 1646-1648 have been described as a series of skillful maneuvers rather than battles. Under Charles X Gustavus, he commanded the campaigns in Poland (1655) and Denmark (1657-1659). During the 1660’s he was a member of the council of regency. He returned to command the Swedish forces against Brandenburg in 1674— 1675, but ill health forced him to relinquish his command before the Battle of Fehrbellin (1675). Wrangel built Skokloster Castle, 10 miles south of Uppsala, which houses one of the finest private collections of weapons in the world, and Wran-gel’s Palace in Stockholm.