Carl Friedrich Gauss; (1777-1855), German mathematician and scientist acknowledged to be one of the three leading mathematicians of all time, the others being Archimedes and Newton. His outstanding work includes the discovery of the method of least squares, the discovery of non-Euclidean geometry, and important contributions to the theory of numbers.

Gauss was born in Brunswick, Germany, on April 30, 1777. He was an exceptionally precocious child. At the age of three he is said to have detected an error in his father’s bookkeeping. When he was ten he startled the local schoolmaster by mentally summing the integers from one to a hundred. With the financial support of the Duke of Brunswick, Gauss entered the Collegium Carolinum in Brunswick at 15. Until his death in 1806 the Duke supported Gauss.

In 1795, Gauss was admitted to the University of Gottingen. By this time he had already made the important discovery of the method of least squares, yet he had not decided whether his major interest was philology or mathematics. He chose the latter in 1796, when he discovered how to construct a regular polygon of 17 sides, using only a compass and a straightedge. Gauss entered the method as the first item in a mathematical diary that he kept until 1814. This diary makes it possible to verify the priority of Gauss in many of the discoveries he did not publish.

Most startling among the unpublished discoveries of Gauss is that of non-Euclidean geometry. With Farkas Bolyai, a fellow student at Gottingen, Gauss had discussed attempts to prove Euclid’s parallel postulate. By 1824 he had concluded that it was possible to develop geometry based on the denial of the postulate. He did not publish his work, probably because of its controversial nature. A second striking discovery was that of noncommutative algebras, announced in 1843 by Sir William Hamilton and in 1844 by Hermann Grassmann. It is now known that Gauss had anticipated them by many years but again failed to publish his results.

In 1799, Gauss earned his doctorate at the University of Helmstedt. His thesis contained the first proof of the fundamental theorem of algebra, which states that every algebraic equation has a root of the form a + bi, where a and b are real numbers and i is the square root of minus one. Numbers of the form a + bi are now known as complex numbers or, if a and b are whole numbers, as Gaussian integers. Gauss’s proof implies a geometric representation of complex numbers, known as the Gaussian plane.

Gauss developed the theory of elliptic functions. He discovered that the trigonometric functions, defined through the inverse of f(x) =

∫ dx / √(1 — x²), are a special case of a more general class of functions, known as elliptic functions, derived as the inverse of f(x) =

∫  dx/ √(1 — xˆ4)  The former have only a single period, 2tt, but the latter have two distinct periods. However, he did not publish his results. The remarkable property of double periodicity was rediscovered and published by Niels Abel and Karl Jacobi in 1827-1829.

The reputation of Gauss was established in 1801 through the publication of his greatest treatise, a book on the theory of numbers titled Disquisitiones arithmeticae. This work, dedicated to the Duke of Brunswick, developed a new algebra, the algebra of congruence. For this he introduced the notation b ≡ c(mod a), which is still standard in the theory of numbers. The symbol ≡ for congruence seemed appropriate to Gauss in that it had many properties in common with the ordinary relation of equality, but the algebra of congruence differs in important respects from the algebra of equality. For example, if ax = ay (where a ≠0), then x = y; but if ax ≡ ay (mod m), it does not follow that x ≡ y (mod m) unless a is prime to m.

Among the congruence properties proved in the Disquisitiones is one that its author called “the gem of arithmetic”—if p and’q are primes, then x² ≡ q (mod p) and x² ≡  p (mod q) are either both solvable or both unsolvable, unless both p and q are of the form 4n + 3, in which case one is solvable and the other is not. This “law of quadratic reciprocity” had been expressed in alternative form by Legendre, a jealous rival in several mathematical branches.

The book also includes a rigorous proof of the fundamental theorem of arithmetic, which asserts the unique factorability of every integer into prime factors. For Gaussian integers this theorem, he saw, fails to hold. The integer 5, for example, can be factored into Gaussian primes in two ways—either as (1 + 2i)(1 — 2i) or as (2 + i)(2 — i). The notation i for the square root of minus one, occasionally used by Leonhard Euler, was firmly established through this work. Gauss planned the Disquisitiones as a 2-volume work, but the second part never appeared because his attention was diverted to astronomy. Gauss later described the theory of numbers as “the queen of mathematics,” mathematics in turn being “the queen of sciences.”

On Jan. 1, 1801, the asteroid Ceres was discovered by Giuseppe Piazzi. But after a short time, during which it had covered but a small portion of its orbit, it was lost in the sun’s rays. Recalling his method of least squares, Gauss could not resist the challenge of computing the orbit of Ceres from the scanty data available. His triumph was complete when, at the end of the year, the asteroid was clearly seen in the position he had predicted. In 1802 his friend Heinrich Olbers discovered the asteroid Pallas, and Gauss computed its orbit also.

When, in 1807, Olbers found another asteroid, Gauss gave it the name Vesta and plotted its orbit. Not until 1809, following researches in statistics, did he publish his methods in the Theoria motus. The scheme he used for computing orbits from a limited number of observations is known as “Gauss’s method” and is useful today in the tracking of satellites. Gauss wrote so extensively on the theory of errors of measurement in the Theoria motus and subsequent works that the normal frequency distribution represented by the familiar bell-shaped curve is often referred to as a “Gaussian distribution.” 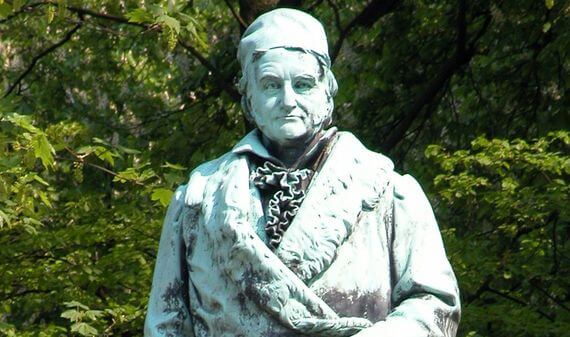 In 1807, Gauss accepted an appointment as professor of astronomy and director of the Got-tingen Observatory, a post he held to the end of his life. He seems to have been influenced by the prospect of much opportunity for research, with little responsibility for regular teaching, for which he felt no attraction.

In 1809 his first wife, Johanna, whom he had married only four years before, died. A year later he married Minna Waldeck, daughter of a Gottingen law professor. He had three children by each marriage. None manifested unusual mathematical ability.

In 1811, Gauss extended the calculus to functions of a complex variable and discovered a fundamental theorem of integration:

if a function f(z) is analytic at all points on and within a simple closed curve C in the Gaussian plane, then the integral of f(z) along C is zero. The theorem is known today as Cauchy’s integral theorem, in recognition of its rediscoverer. Again, Gauss failed to publish his work. Cauchy is also most frequently associated with tests for the convergence of infinite series of numbers, but the need for such tests had been recognized by Gauss in 1812, when he published an important work on the hypergeometric series. This study was so thorough that the series generally bears Gauss’s name.

In 1821, Gauss presented to the Royal Society of Göttingen a memoir, Theoria combinations observationum erroribus minimis obnoxiae, in which he associated the method of least squares with the calculus of probabilities. In subsequent memoirs he applied the method to problems in geodesy and physics.

Through a treatise written in 1827, Disquisitiones circa superficies curvas, Gauss became the effective founder of differential geometry. In this work, which he described as a “metaphysics of space,” he introduced the concept of the Gaussian, or total, curvature of a surface. This is a convenient measure of the extent to which a surface departs from the flatness of a plane, for which the Gaussian curvature is zero. He showed that his measure of curvature remains unchanged under a continuous deformation of a flexible and inextensible surface.

In 1828, Gauss undertook for George IV the triangulation of the whole kingdom of Hannover, and on the basis of this work, Gauss published an important 2-volume work, Untersuchungen über Gegenstände der höheren Geodäsie (1844-1847). Gauss once wrote “All the measurements in the world are not worth one theorem by which the science of eternal truths is genuinely advanced,” but he nevertheless insisted that his geodetic activities, as compared with other demands upon his time, were relatively useful to science.

In the course of his astronomical and geodetic pursuits, Gauss devised the Gauss eyepiece, which still is used for autocollimations in spectrometers and refractometers, and he invented the heliotrope.

After Wilhelm Meyer joined the faculty of Göttingen in 1831, he and Gauss joined in magnetic and electrical experiments. In 1832, Gauss read to the Royal Society at Göttingen a classic paper on terrestrial magnetism, Intensitas vis magneticae terrestris ad mensuram absolutam revocata, in which he proposed well-defined standards of measurement. A unit of magnetism was later named for him.

In 1833, Gauss built a magnetic observatory that became the center of observation and research on variations in magnetic declination. In 1836, Gauss, Wilhelm Weber, and Alexander von Humboldt were instrumental in establishing the German Magnetic Union, a network of stations that later became worldwide. Gauss developed the bifilar magnetometer, and he and Weber devised the mirror galvanometer.

In 1833, Gauss and Weber ran a wire from the observatory to the physics laboratory and arranged electromagnets to strike a bell at one end when the circuit was closed at the other.

Realizing that their apparatus would be useful for transmitting messages, the inventors published an account of their work in 1834, and in 1835 Gauss spoke of it before the Royal Society of Gottingen. In 1845, the year following Morse’s triumph, the telegraph system of Gauss and Weber was destroyed by lightning. Their invention had received so little publicity outside Germany that Sir David Brewster in England heard of it for the first time in 1854. He wrote to Gauss for further information, and Gauss replied in the last letter he wrote before his death.

In 1845 the University of Gottingen assigned Gauss the task of supervising the Fund for Widows and Children of Professors, and in this connection he made important contributions in the application of probability and statistics to actuarial science.

The productive life of Gauss had covered more than half a century in 1849, when the golden jubilee of his doctorate was celebrated at Gottingen. On this occasion, returning to the theme of his thesis, Gauss presented a fourth proof of the fundamental theorem of algebra. The brilliance of his career has justified the now familiar characterization of him as “the prince of mathematicians.” Gauss died in Gottingen on Feb. 23, 1855.