El; On Mount Saphon dwelt El, the ‘first’ Canaanite god. The father of gods and men, he was remote, ‘old’, the ‘master of time‘, the ‘benevolent and merciful lord‘. lt was under his suzerainty that Baal married Anat, defeated thesea god Yam as well as the deadly Mot, and was installed as the divine bestower of life-giving rain. 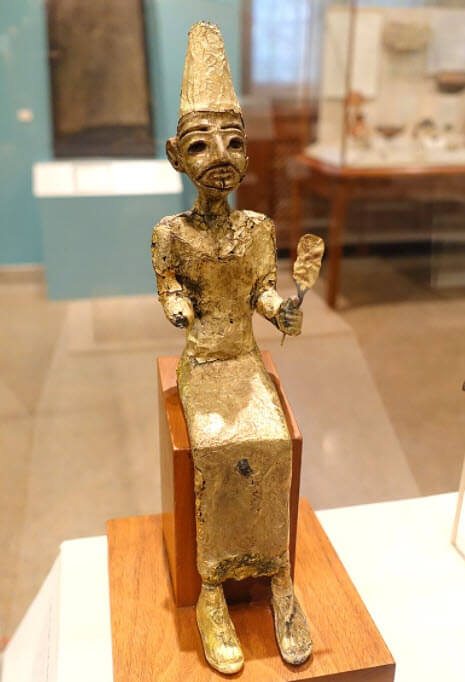 El represented omnipotence at one remove, so that he was always portrayed as a seated figure, wearing bull’s horns, the symbol of strength.Tn the Old Testament there is mention of the supreme deity as El and Yahweh. About Melchizedek, King of Jerusalem, we hear that ‘he brought forth bread and wine, and he was the priest of the most high God‘. This was El Elyon. It is now thought that the Old Testament is a compilation of at least three main versions of Hebrew religious history, the Yahwist one being the dominant tradition.

Two epic cycles associated with El concern Keret and Aqhat. The first rells of the assistance given to Keret, the son of El and a righteous king. The god helped find a second wife, blessed him with ‘seven sons, yea eight’, andtowards the end of his reign saved him from senility. The text breaks off at apoint where Keret is accused of incompetence by one of his sons. In the second epic conflict takes place when the goddess Anat seized the wonderful bow of Aqhat, the son whom El had granted to King Daniel.

Grateful for the hospitality shown to him by the King, the smith god Kothar gaye Aqhat a bow, ‘its horns … twisted like a serpent’. The prince refused Anat; he said that her offer of immortality in exchange for the weapon was an illusion to aman destined to die: for such presumption the goddess had him killed with the consent of El. But the bow fell ‘in the midst of the waters’ and broke along with its precious arrows.

Moreover, with the disappearance of Aqhat, the vegetation withered away and Baal sent down neither rain nar dew. The fragmentary text leaves Paghat, Daniel’s daughter, bent on revenge-‘to smite the smiter of my brother’ . The parallel with Baal is striking, though it is by no means certain that Aqhat was an aspect of a ‘dying and reviving’ fertility deity.