What are the causes of burns? Burns symptoms and treatment. Information on burns first aid.

Burns; in medicine, are the effects produced on living tissue by excessive heat, caustic chemicals, electricity, or various forms of radiation. Burns are usually classified on the basis of their severity. A first degree burn is a simple redness (erythema), such as that of a mild sunburn. Second degree burn means the simple blistering of the epidermis (the thin superficial layer of the skin), such as occurs in a more severe sunburn. In a third degree burn, there is destruction of the full thickness of the skin, both the epidermis and the underlying dermis. In fourth and fifth degree bums, the bone and adjacent structures are charred. Unless the area is very limited, victims with fourth or fifth degree burns do not usually survive long enough to be treated. 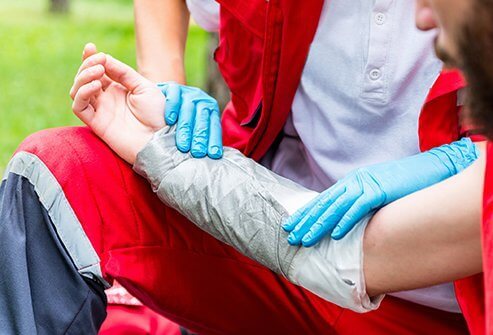 Burns may be caused by direct heat, flames, smoke, caustic chemicals, electricity, friction, wind, or various forms of radiation. In a broad sense, death of the body tissues is brought about by the precipitation of proteins in the cells. Although each causative agent accomplishes this in an individual manner, the end results are very much the same.

Burns produced by friction are caused by a combination of heat and abrasion. Wind as a causative agent acts in a different manner, removing the protective layer of moisture from the exposed skin surface, thus enhancing the penetration of the sun’s ultraviolet rays. This type of bum is not caused by heat but results from injury to the cells due to light waves ranging from 3200 to 2900 angstrom units. These rays initiate complex chemical aberrations that destroy living cells and interfere with the body’s normal defenses. Because ultraviolet rays scarcely penetrate the epidermis, the burns they produce are either first or second degree burns.

Like ultraviolet rays, X-rays and particles of atomic radiation cause chemical disturbances of the cells, interfering with their metabolism and reproductive processes. These burns, unlike those caused by ultraviolet rays, are usually very severe, causing the affected tissues to ulcerate (break open and disintegrate), atrophy (waste away), and become scar tissue.

Inhalation burns from smoke, flames, or steam are often immediately fatal. When not fatal, they always cause frustrating complications. In the upper respiratory tract, breathing is affected by the swelling of the air passages, the secretion of mucus, and muscular spasms of the air tubes. In the lungs, the accumulation of fluids (edema) may cause death by drowning. This fluid accumulation in the lungs is often difficult to prevent because the victim is generally in shock and requires transfusions of additional fluids—whole blood, blood plasma, and fluids containing sugars and various salts.

In treating first and second degree burns, local therapy is usually all that is needed. Such therapy includes ice baths or the application of butter, olive oil, vinegar, vaseline, special jellies containing extracts from the leaves of aloe plants, or various antiseptic and anesthetic substances.

In the management of more severe burns, keeping the victim alive during the first several days is of greater importance than local therapy. One of the first problems is to alleviate the victim’s excruciating pain, usually by administering morphine or other narcotics. The next problem is to prevent or counteract the effects of shock, in which there is a dramatic drop in blood pressure due to the loss of fluids from the larger blood vessels by bleeding or oozing or by dilation (widening) of the smaller blood vessels. If the blood pressure drops too low, brain damage and death may follow. The reestablishment of a blood pressure necessary to keep the patient alive is a difficult task, and various formulas have been devised for estimating the needed amounts of fluids and salts.

Another vexing problem that arises in cases of severe burns is infection, especially by Pseudomonas aeruginosa bacteria, streptococci, staphylococci, and bacteria that cause tetanus and gas gangrene. Toxemia, anemia, kidney failure, and a type of ulcer known as Curling’s ulcer may also occur.

After a lifesaving regime that may include the use of an artificial kidney and the administration of antibiotics, oxygen, analgesics, whole blood, blood plasma, bacteria antitoxins, and various other substances, attention can be turned to local therapy. A large part of the local therapy consists of using chemicals that further precipitate body proteins to form a crust or scab that covers the wound while the natural healing process takes place underneath. Some of the substances that have been used for local therapy in the past are various dyes, such as scarlet red, gentian violet, and brilliant green. Picric acid preparations and ointments and sprays containing tannic acid have also been used. However, these substances have now been replaced by other chemicals. One of the most popular chemicals for local therapy is a dilute solution of silver nitrate, which is used in repeated applications. Although this solution blackens everything it comes into contact with, it has many advantages. It is easy to apply, produces a soft crust, helps destroy invading microorganisms, and helps ease pain. Another substance used is mafenide hydrochloride, which is very effective against Pseuaomonas aeruginosa bacteria.