Who is the pirate Blackbeard? Information about Blackbeard biography, life story and facts.

Blackbeard; (died 1718) was an English pirate notorious for his forays against shipping off the West Indies, the Spanish Main, and the coast of North Carolina. His real name was Edward Teach or Thatch. Little is known of his early life, but it is thought that he was born in Bristol, England, and went to the West Indies during the War of the Spanish Succession. Active in privateering, he turned pirate at the war’s end (1713). Although his first recorded act of piracy took place in 1716, his depredations probably had begun earlier. 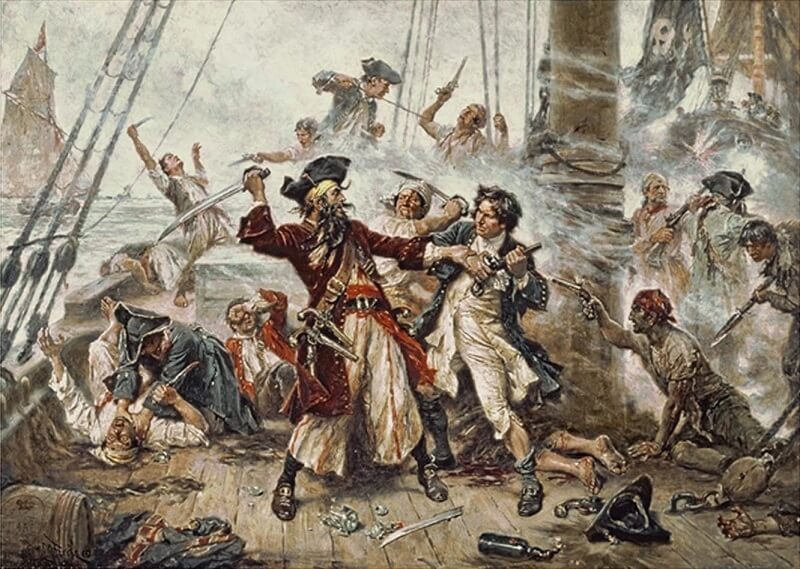 In 1717, Blackbeard was in command of a sloop cruising in company with another under Capt. Benjamin Hornigold. Among their prizes was a large French merchant vessel that Black-beard took as his own; he refitted it as a 40-gun warship and renamed it the Queen Anne’s Revenge. That same year the British-appointed governor of the Bahamas was empowered to grant pardons to privateers turned pirates. Hornigold and others sailed there and accepted the king’s mercy. Blackbeard, however, continued his cruise through the West Indies and then sailed northward along the Carolina and Virginia coasts. At Charleston, S. C., he put ashore a landing party bearing a directive demanding medical supplies on pain of killing shipboard prisoners. The supplies were quickly delivered.

On or about June 10, 1718, the Queen Anne’s Revenge and one of three attending sloops were wrecked by a storm off Topsail Inlet on the North Carolina coast. Blackbeard and the crews of the foundered ships escaped to the other two vessels. Quarrels ensued, and many of the men were put ashore. Some made their way to Virginia, where they were captured and hanged. Blackbeard, with 20 or 30 followers, proceeded to Bath, N. C., to accept the previously announced royal grant of mercy.

According to tradition, Blackbeard then formed a secret partnership with Gov. Charles Eden and his secretary, Tobias Knight, who was also the collector for North Carolina. Under this arrangement Blackbeard brought in several prizes, including a large French merchant ship, which he claimed to have found abandoned at sea. With his newfound wealth, Blackbeard led the life of a libertine, forcing planters to provide him with supplies and levying tolls on vessels plying the Pamlico River. Legend says that he also married a local girl.

Realizing that their corrupt governor would do nothing to solve their plight, the North Carolina planters addressed a list of complaints to the lieutenant governor of Virginia, Col. Alexander Spotswood, who in turn referred the matter to captains George Gordon and Ellis Brand of the Pearl and Lyme, two British frigates stationed in the James River. Two smaller boats were fitted out and manned from the frigates and placed under command of Robert Maynard, 1st lieutenant of the Pearl. On Nov. 22, 1718, they encountered Blackbeard in an inlet of Ocracoke Island, off North Carolina. A fierce battle was waged in which casualties on both sides were high and Maynard killed Blackbeard in a hand-to-hand struggle. 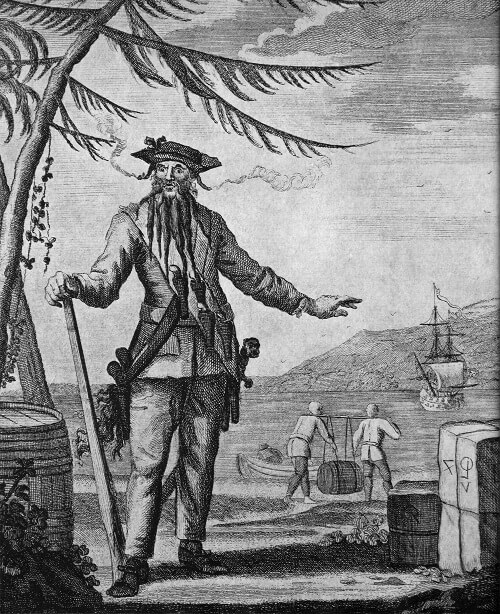 One of the most colorful of the corsairs, Blackbeard was more a braggart than a man of courage. His treasure is rumored to be buried at many sites along the Atlantic seaboard.