Bismuth; a metallic element, symbol Bi, is the heaviest member of the nitrogen family and is located in column VA of the periodic table. Lists of known elements during the Middle Ages often contained bismuth. Although Georgius Agrícola, the mining and metallurgy historian, described the element “bismetum” in the 16th century, early writers generally seemed confused between antimony, tin, lead, and bismuth, and it was not until about 1740 that bismuth was finally identified as a distinct element.

Bismuth eutectic alloys are used in automatic sprinkler systems because of their low melting points. Wood’s metal, for example, which consists of 50% bismuth, 25% lead, 12.5% tin, and 12.5% cadmium, has a melting point of only 126° F (70° C). These alloys are also used in special solders, as safety plugs in compressed gas cylinders, in automatic shutoff systems, in fire detection apparatus, fire door releases, and temperature-controlled safety clutches. Because alloys containing more than 55% bismuth expand on freezing, they are used in the preparation of castings, type metal, and accurate dies.

Bismuth is also used as a nuclear reactant coolant because of its low neutron absorption cross-section, its low melting point, and its high boiling point. 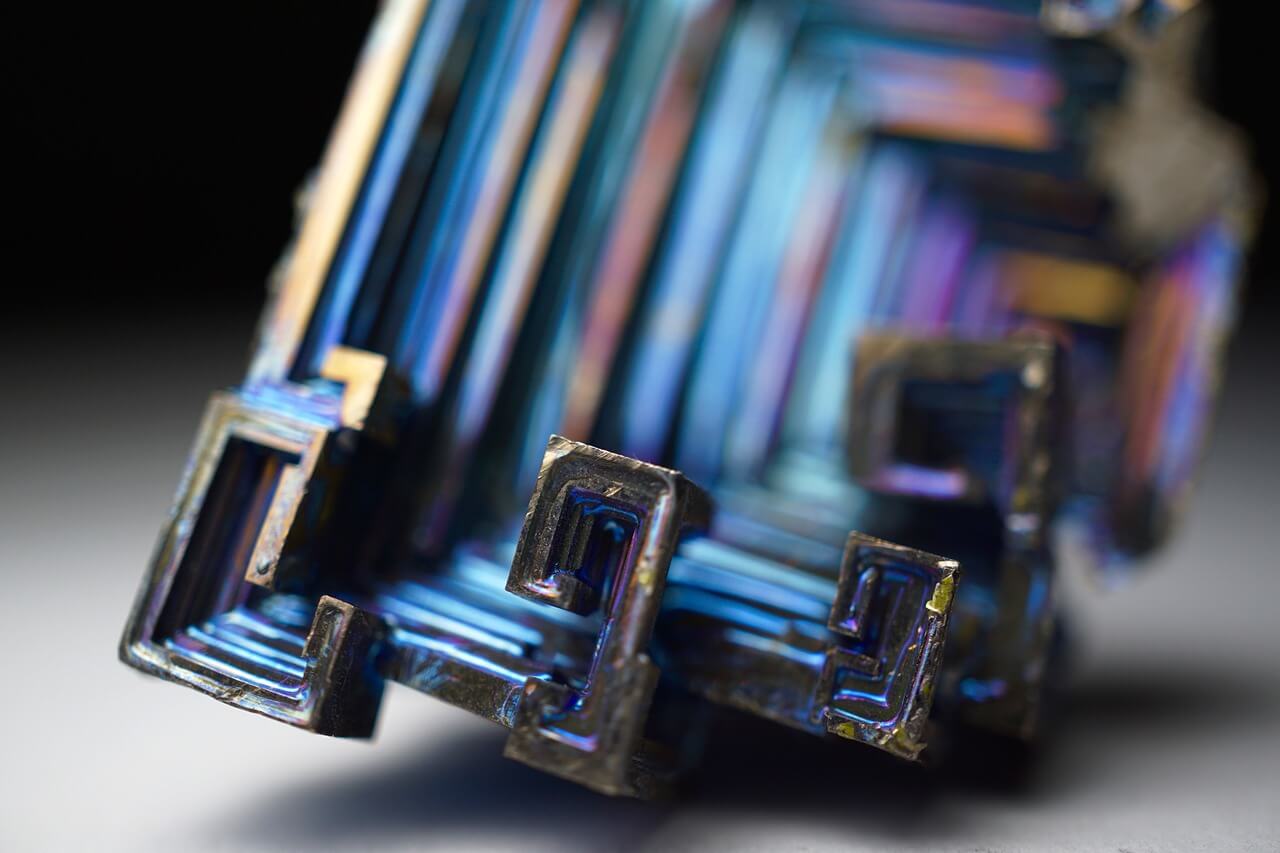 The most widely used bismuth compounds are bismuth oxide and basic bismuth nitrate, BiONO3. The oxide is used in making enamels for cast iron and in the manufacture of glass and ceramic products. The basic nitrate is used in porcelain painting to fire on gold decorations, to impart an iridescent surface to pottery, and in cosmetics. The basic chloride is used in the polishing of synthetic pearls to give them an iridescent finish, in cosmetics, and as a pigment.

Bismuth is a lustrous, silvery gray metal with a reddish tint. It is hard and brittle and coarsely crystalline, forming face-centered rhombohedral crystals. It is the most metallic member of the family that also includes nitrogen, phosphorus, arsenic, and antimony. Its atomic number is 83, and its atomic weight is 208.98. The configuration of the outer electrons in the ground state of the atom is 5s^2, 5p^6, 5d^10, 6s^2, 6p^3.

Stable bismuth-209 is the only naturally occurring isotope of bismuth. The best known of the radioactive isotopes of the element is bismuth-210, which is sometimes referred to as radium E. This isotope decays by the emission of 1.17 Mev beta particles with a half-life of 5.0 years. Bismuth-210 is often used as a beta standard in the calibration of nuclear counting equipment.

The melting point of bismuth is 519.8° F (271° C), and the boiling point is 2642° F (1450° C). Bismuth can be extruded to form wire, but the wire is exceedingly brittle. This difficulty can be overcome by the addition of small amounts of other metals. Brittle bismuth cannot be rolled into sheets or foil. The hardness of bismuth is 7.3 on the Brinell scale.

The coefficient of linear expansion of bismuth is 13.45 x 10^-6 per degree C. There is a 3.3% expansion on solidification of molten bismuth. The thermal conductivity of the solid is 0.018 calorie per sec-cm^2°C. With the exception of mercury, bismuth has a lower thermal conductivity than any other metal. The electrical resistance of solid bismuth, which is 106.5 at 0° C, increases with pressure and decreases with tension. Bismuth and antimony are the only metals whose resistance is greater in the solid state than in the liquid state. Bismuth is the most diamagnetic of the metallic elements, and it exhibits the greatest Hall effect (increase of resistance when subjected to the influence of a magnetic field). 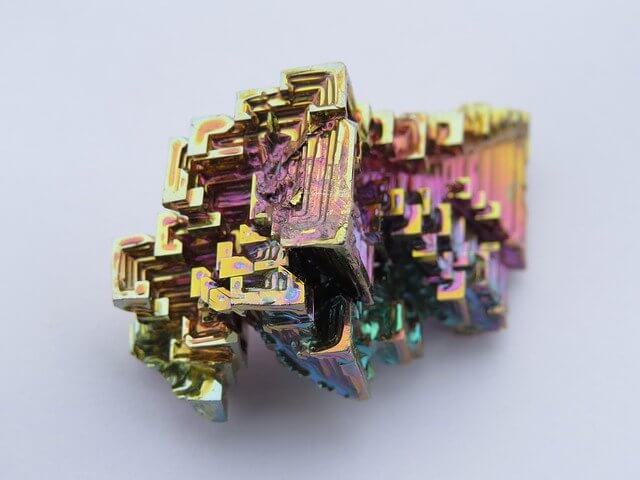 Bismuth is inert in dry air at room temperature, but at red heat it will combine with oxygen to form a yellow oxide, Bi4O6. In moist air at low temperature, slow oxidation of the metal occurs, producing a thin coat of oxide that protects the metal from further oxidation. Almost all compounds of bismuth contain the atom in the trivalent state, although bismuth is occasionally found in the +1 or +5 state.

Direct reactions occur between the halogens and bismuth and between sulfur, selenium, and tellurium and bismuth. The metal dissolves in nitric acid to give bismuth nitrate, Bi(NO3)3. It dissolves in hot concentrated sulfuric acid to form bismuth sulfate, Bi2(SO4)3, and it dissolves slowly in hydrochloric acid in the presence of air to give bismuth chloride, BiCl3. All of the trihalides, with the exception of the fluoride, hydrolyze rapidly on contact with water to form the oxyhalide. For example, bismuth chloride hydrolyzes to form the slightly soluble oxychloride, BiOCl, which is also called bismuthyl chloride, subchloride, or basic chloride.

Although compounds of tripositive bismuth exhibit little ionic character in the solid state, in polar solvents such as water they form ions such as the bismuth ion, Bi^3. When this ion is added to a solution containing a base, a colloidal precipitate of bismuth hydroxide forms. If the bismuth ion is treated with hydrogen sulfide, a characteristic black precipitate of bismuth sulfide forms, which is soluble only in concentrated acid.

Approximately 0.00002% of the earth’s igneous rocks contain bismuth. The element is found in nature in several states. It occurs as a free metal; in an oxide, Bi2O3 • H2O, called bismite; in a sulfide, Bi2S3, called bismuthenite or bismuth glance; and in a carbonate, (BiO)2CO3 • H20, called bismutite. The chief sources of bismuth are deposits in the United States, Bolivia, Canada, and Spain. Minor sources of the element are some lead, copper, and tin ores of which bismuth is a constituent.

About 3 million pounds (1.4 million kilograms) of bismuth are produced annually. Ores containing the free metal are heated to melt the bismuth, and the molten metal is then separated from the earthy portion (gangue) of the ore. Sulfide ores are heated in air, or roasted, to form the oxide, which is then reduced with coke or iron to produce bismuth.

In the United States, most of the bismuth is prepared as a by-product of lead and copper smelters and refineries. Bismuth acts like lead in usual smelting operations. During the roasting of copper ores for elimination of sulfur, most of the lead and bismuth remain in the calcine, and only small amounts are found in flue dust and fumes. When the calcine is smelted to form copper matte, the major portion of the bismuth and lead concentrates in the matte. During the converter treatment of the copper matte to produce blister copper, the bismuth and lead are fumed off. Electrical filters called Cottrell precipitators collect the dusts and fumes, which undergo further treatment in lead smelting plants. Bismuth is considered an undesirable and detrimental impurity in refined lead, and it must be removed before the lead can be marketed. 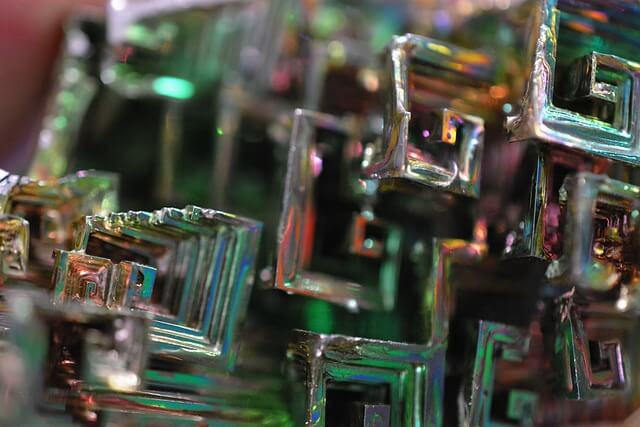 There are four important methods by which bismuth is separated from lead. By careful refining of bismuth obtained by any of these methods, commercial bismuth that is 99.999% pure can be produced. In the first method, the crystallization process, advantage is taken of the fact that alloys of lead and bismuth have lower melting points than pure lead. The bismuth-lead mixture is heated and then allowed to crystallize by cooling. As lead crystals form, the liquid portion becomes increasingly rich in bismuth, and it is subsequently drained from the crystals. In the Betts electrolytic process, impure bismuth-containing lead is installed as the anode in an electrolytic cell with a pure lead cathode. During electrolysis, the bismuth collects as sludge around the anode. The sludge is washed, dried, and melted to form metal and a slag. While in a molten state the metal is selectively oxidized to remove any impurities.

In the Betterton-Kroll process, the bismuth-containing lead is heated, and metallic calcium and magnesium are gently stirred into the molten metal. Calcium-bismuth and magnesium-bismuth compounds having high melting points and low density are formed. These intermetallic compounds are easily removed from the lead bath, and the bismuth is then freed from the other metals by chlorination.

In the Sparry process, the fourth method of separation, bismuth-containing lead is used as an anode in Sperry white-lead cells. Bismuth falls to the bottom of the cell as a sludge or remains as a slime on the anode. The slime is washed, dried, and melted to yield an impure bismuth bullion, which is then sent to the bismuth refinery.