What is Bacchae about? Information on ancient Greek tragedy Bacchae story and interpretations.

Bacchae; a tragedy by Euripides posthumously produced in Athens by the author’s son, probably in 405 b.c. With two other plays, the extant Iphigenia at Aulis and the lost Alcmeon at Corinth, it was awarded first prize in the drama contest. All three plays must have been written during the poet’s retirement from Athens at the court of King Archelaus of Macedonia.

The plot of The Bacchae concerns the efforts of King Pentheus of Thebes to crush the worship of Dionysus (Bacchus), his own cousin. A Stranger (Dionysus) with a band of female Bacchanalians (Bacchae) invades Thebes. The Bacchae are peaceful, but if opposed, they are roused to ecstatic madness. Although he is warned by his grandfather Cadmus and by the prophet Tiresias that Dionysus must be acknowledged, Pentheus captures the Stranger. A mysterious earthquake frees him, however, and he hypnotically induces Pentheus to dress in female clothing and go into the woods to spy on the Bacchic band. A messenger narrates the sequel: Pentheus is detected and torn to pieces by the wild women, led by his own mother, Agave. Then Agave enters, carrying her son’s head. As she gradually regains her senses, Dionysus, who had announced his coming triumph in the Prologue, appears without disguise and pronounces further penalties on the Theban royal house. 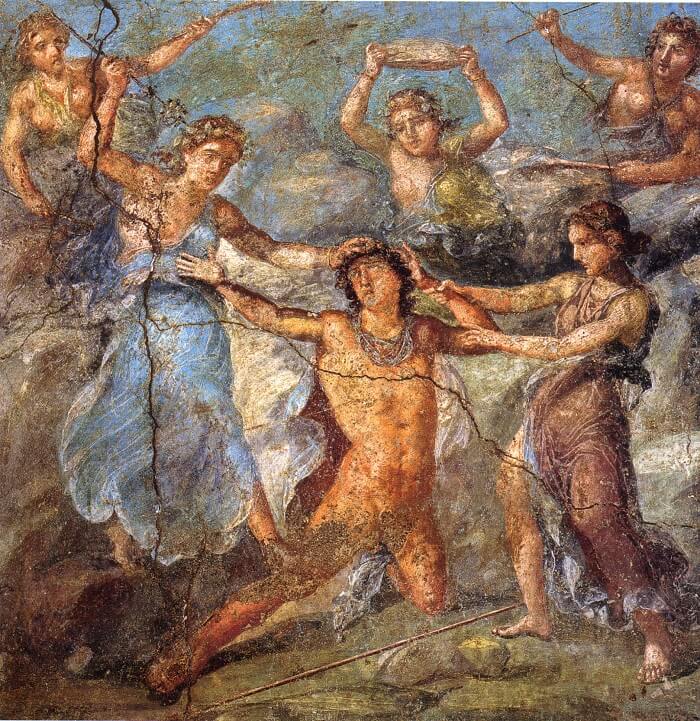 Interpretations of this macabre masterpiece differ sharply. Some critics consider it an object lesson against religion, or at least against orgiastic religion. Other critics contend that Euripides is urging recognition of the divine element in man.

A unique feature of the play is the presence of the god Dionysus, for although the Athenian dramatic festivals were held in honor of this god, very few tragic plots had any connection with him. Scholars assume that Euripides became interested in the cult of Dionysus because of his experience in Macedonia, a center of Dionysianism.