Babbitt; is a novel by the American writer Sinclair Lewis, published in 1922. It presents in great detail a representative cross section of the life of George Follansbee Babbitt, a prosperous real estate broker in the fictional city of Zenith in the Midwest. Several times in the course of the novel, Babbitt more or less consciously attempts to revolt from the limitations and deadening monotony of his domestic, business, and inner life, but each time finds himself unable to transcend permanently the pressures of his environment and his own poverty of intellect, imagination, and moral character. 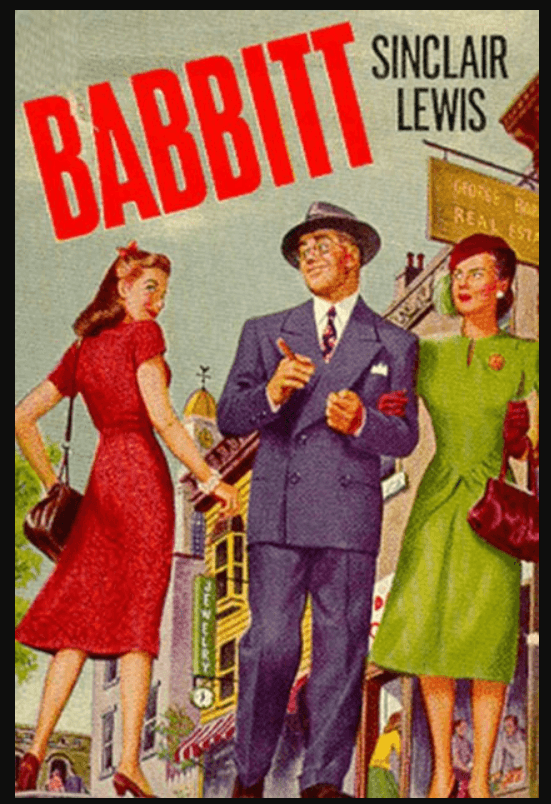 Besides Babbitt, who is drawn sympathetically and with great effectiveness and verve, the important characters are his colorless wife, Myra; Paul Riesling, an artist by disposition turned businessman by necessity; Seneca Doane, a persuasive socialist lawyer; and Tanis Judique, an attractive, approachable widow, who surrounds herself with repellent pseudo-Bohemians. Babbitt’s three children also figure prominently in the stresses of his family life.

Many critics regard Babbitt as the best of the Lewis novels, and there is evidence that the author himself ranked it high among his works. The book is both satirical and realistic, achieving a spirit of comic sadness. The novel has added the name of its hero to the American language, and the word “Babbitt” is included in standard dictionaries. To label someone a Babbitt is to stigmatize him as an obtuse and humorless philistine and a blatant optimist who uncritically and smugly accepts his own standards, however narrow, unenlightened, and unlovely they may be.