As You Like It comedy, theme, short summary, analysis and sparknotes. Info about the romantic comedy As You Like It.

As You Like It; is a romantic comedy by William Shakespeare, probably written late in 1599 or early in 1600. It was entered in the Stationer’s Register on Aug. 4, 1600, to establish copyright, but it was first printed in the Folio of 1623. Despite some misprints and inconsistencies, which suggest minor alterations, the Folio text is a good one and may have been based on the promptbook.

In As You Like It, Shakespeare dramatized a charming but artificial pastoral romance by Thomas Lodge, Rosalynde, or Euphues’ Golden Legacie (1590). He omitted much from his source; altered names, titles, and events; and cut the duration of time. But his most important departures from the original were his introduction of new characters, his development of those already in the story, and his relocation of the scene to England. Finally, he added the element of humor to a tale that had been simply a pastoral romance. 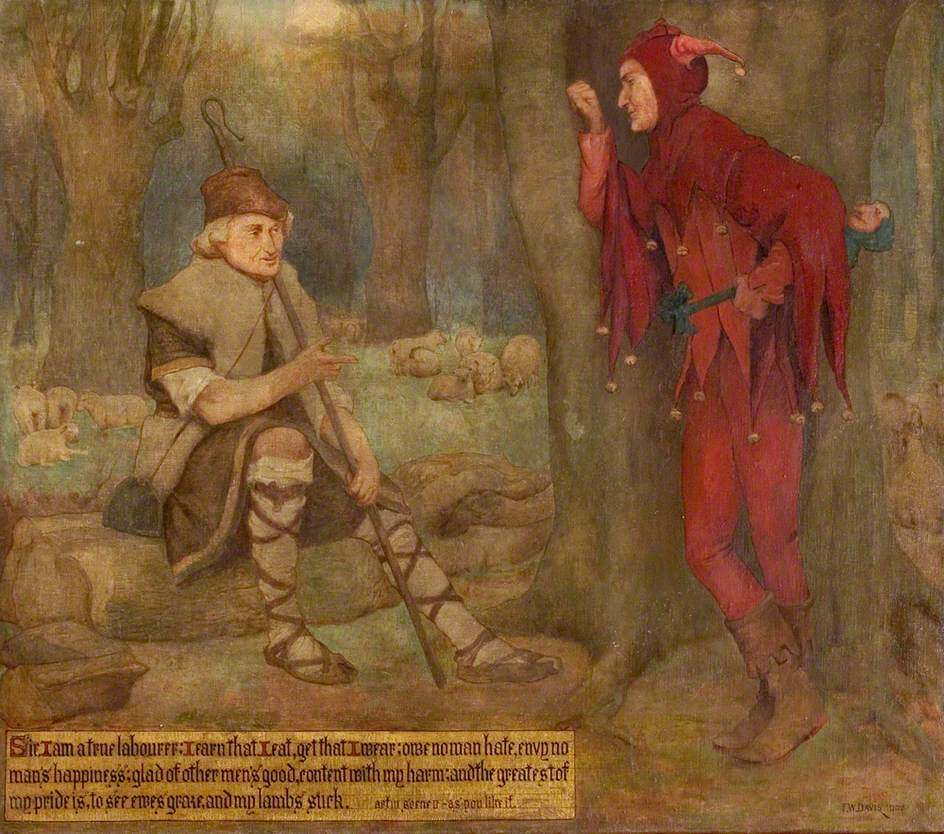 Though the plot of As You Like It is improbable and somewhat mechanical, it functions efficiently in providing situations for character development and witty dialogue. In the play, Rosalind becomes the leading figure; the pastoralism of Silvius and Phebe is ridiculed; Corin, Audrey, and William are made authentic rustics; and Jaques and Touchstone are invented to comment on the action. As William Hazlitt wrote, “It is not what is done but what is said that claims our attention.”

The center of the comedy is Rosalind, the most joyous and clearsighted of Shakespeare’s heroines. The manipulator of her own love and the loves of others, Rosalind loses her heart to Orlando at first sight. Making sport of love, she delights in teasing Orlando, and in remaining in disguise as a boy while being wooed by him. On the other hand, she unconsiously reveals the sincerity of her affection through her spate of questions about Orlando to Celia, her friend and confidante. As a dramatic character, Orlando, while manly, is colorless in comparison with Rosalind, and his chief function in the play is as the object of her love. Celia, too, has a romance—this one conventional—with Oliver. But lest the play become sentimental or extravagant, Shakespeare inserts the more earthy affair between the country wench Audrey and the country bumpkin William, and parodies high-flown Arcadianism in the romance between Silvius and Phebe.

Healthy balance is further achieved by the deflation of sentiment through the cynicism of the sardonic Jaques and the witty mockery of Touchstone. Jaques has been a libertine; now he is a melancholy contemplative and a professed satirist of love and life. Yet Shakespeare can make fun with him and of him too, as Rosalind does. Touchstone, the court jester, is privileged to expose folly and pretension by word and by action. He reminds the other characters as well as the audience that love and marriage have other and earthier sources than romantic sentiment. Love is presented from many points of view in the play, but never tragically. Whether romantic or realistic, love is a comedy, permeated with songs and laughter and greenwood gaiety.

Despite its faults of plot and occasional prolixity, As You Like It, in its humor, characterization, and commentary, is a genuine delight and one of Shakespeare‘s major achievements in high comedy.

There is a tradition that As You Like It was played before King James I at Wilton on Dec. 3, 1603. Another more dubious tradition states that Shakespeare once acted the part of Adam, who, with Dennis, is one of the two servants of Oliver. The first verifiable record performance is that of 1740 at the Drury Lane Theatre in London, with James Quin as Jaques, Hannah Pritch-ard as Rosalind, and Kitty Clive as Celia. Since then revivals have been frequent. The Rosalinds in England have included Peg Woffington, Dorothea Jordan, Helen Faucit, Adelaide Neil-son, and Lily Langtry.

Since 1786, when the play was first acted in the United States, Laura Keene, Ada Rehan, Mary Anderson, Julia Marlowe, and Katharine Hepburn have been among the outstanding Rosalinds in American productions.