What is aorta? What is the function of aorta? What are the aortic diseases. Information on aorta, anatomy, functions and diseases.

AORTA; the largest artery of the body. The primary function of the aorta is to carry oxygenated blood from the heart to the cells of the body. In shape the artery resembles a walking cane, with the tip of its curved end arising from the aortic valve in the left ventricle of the heart. The arch of the aorta, the part corresponding to the handle of the cane, is located above the heart in the upper middle portion of the chest. The long part of the aorta extends down along the left side of the spine and ends in the lower portion of the abdomen, where it divides into the two common iliac arteries. At its very beginning, the aorta gives rise to the coronary arteries, and as it curves upward and then downward, it gives rise to many other arteries, which carry blood to all parts of the body, including the brain and intestines. 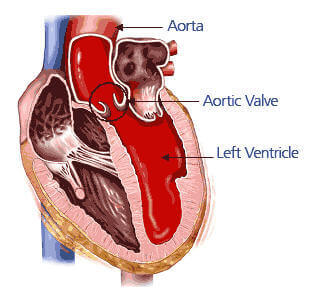 Diseases of the aorta are sometimes classified into two major groups: congenital defects, and disorders caused by diseases also affecting other parts of the body. In one kind of congenital disorder, the portion of the aorta just above the aortic valve may be weak and enlarged, impairing the function of the aorta or causing it to rupture into one of the chambers of the heart. Sometimes a baby is born with an atretic, or very small, aortic arch. This condition may lead to heart failure and death during the first few days of life. The aorta may also be abnormally small in a narrow segment just beyond the left subclavian artery. This condition causes high blood pressure in the arms and low blood pressure in the lower limbs. Generally, most congenital defects of the aorta can be corrected surgically.

Among the most serious diseases that may affect the aorta are syphilis and atherosclerosis. In syphilis, the disease-causing organisms may invade the first portion of the aorta and the aortic arch, causing them to become dilated. Sometimes the infection may damage the aorta wall to such a degree that it thins out and balloons up to form an aneurysm. The syphilis itself can often be treated with penicillin, and the abnormalities it produces in the aorta can usually be corrected through surgery.

Atherosclerosis of the aorta is a common disease of adults.

It is characterized by fatty deposits in the inner lining of the aorta and its branches. This disease can cause gradual narrowing of the end portion of the aorta and lead to pain in the thigh muscle and around the hip during exercise. If atherosclerosis affects the coronary arteries, the vessels supplying the heart tissue, a heart attack may result. If it affects the arteries of the brain, a stroke may occur. Although the obstructed portion of the artery can sometimes be removed through surgery, this is not always necessary.