Who is Anton Webern? Information on the composer Anton Webern biography, life story, works and compositions.

Anton Webern; Austrian composer: b. Vienna, Austria, Dec. 3, 1883; d. Mittersill, near Salzburg, Sept. 15, 1945. With Alban Berg, Webern was one of the earliest pupils of Arnold Schoenberg, with whom he studied from 1904 to 1910. Webem’s life was spent for the most part in and around Vienna, where he held various conductorships and taught composition. When the Germans occupied Austria in 1938, his music was banned, and he was forbidden even to teach. Shortly before the end of World War II he moved with his family to the country near Salzburg and there was killed in a tragic accident by United States military police. 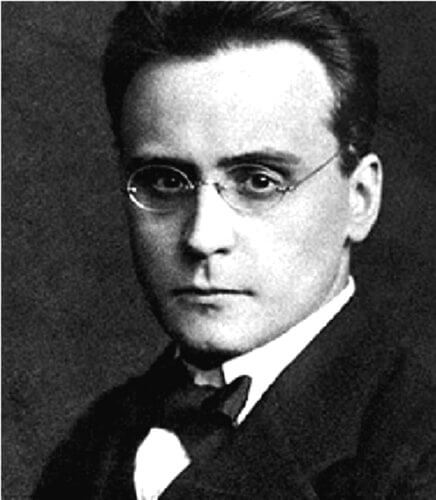 Webern published 31 works, none lasting more than 10/2 minutes, of which half are instrumental compositions and half vocal. Apart from the Passacaglia (1908), which is tonal, his earlier works are written in the free atonal style invented by Schoenberg in 1908; the later works use Schoenberg’s 12-tone technique. But Webern was far more radical than his master, and his music shows a concentration and purity of style which has had an enormous effect on the music of today and has influenced a whole generation of younger composers, especially Pierre Boulez, Luigi Nono, and Karlheinz Stockhausen.

In Webern’s music each single tone is of the utmost importance, and the architecture is based on the relations between the individual tones. The sound of his music is usually magical —he had an extraordinarily acute ear—but this is always subordinated to the structural design. He normally avoided large orchestras and wrote for smaller but unusual combinations of instruments; among his last works are three cantatas for chorus and small orchestra. His complete published works have been recorded by a Los Angeles ensemble directed by Robert Craft. This recording does not include a number of unpublished early works, now in the University of Washington, which were discovered after his death.