Antoine Louis Barye; (1796-1875), French sculptor, who was noted for his animal figures. He was born in Paris on Sept. 24, 1796, the son of a goldsmith. He was a student of the sculptor François Joseph Bosio and also studied with the painter Antoine Jean Gros, who had a great influence on his art. 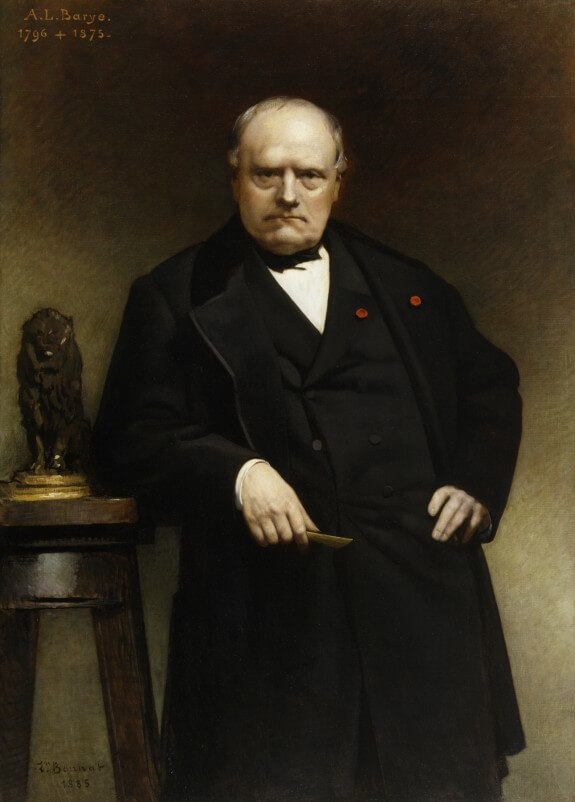 After working as a goldsmith from 1823 to 1828, Barye began to achieve artistic success in the Paris salons of the early 1830’s, making especially favorable impressions with his Tiger Devouring a Crocodile (1831) and Lion Crushing a Serpent (1833). However, many of his works, including the admirable Lion in Repose (1836), were rejected by later salons. It was not until the exhibition of his powerful Centaur and Lapith in 1850 that Bayre achieved national prestige. In 1854 he was appointed professor of drawing at the Louvre, and in 1855 he was made a chevalier of the Legion of Honor. In spite of his success, however, he was dogged by poverty for most of his life. He died in Paris on June 25, 1875.

Barye’s smaller pieces, which were designed to be reproduced in bronze, have great charm; his larger works are executed in a strong, realistic, and frequently dramatic style. Many of his major works, such as Theseus and the Minotaur, Jaguar Devouring a Hare, and Jaguar and Gavial, are in the Louvre in Paris. The Metropolitan Museum in New York City has several important pieces, including Group Symbolizing Force and Group Symbolizing War. The Brooklyn Museum also has a good selection of his sculpture, including Ethiopian Gazelle, Ape Riding a Gnu, Fawn Reclining, and African Elephant.