Anna Karenina; is a novel by the Russian author Leo Tolstoy. It is considered to be one of the masterpieces of world literature. It was first published from 1875 to 1877 as a serial in the Russki Vestnik (Russian Messenger). The first complete English translation appeared in 1899.

Anna Karenina contains two main narrative lines. The major story deals with the unhappy marriage of Anna and Aleksei Karenin and with Anna’s tragic affair with Count Vronsky. The unhappy domestic life of Anna’s brother, Prince Stepan Oblonsky, serves to echo Anna’s predicament. In contrast, Tolstoy presents the second plot, dealing with the relationship between Kitty Shcherbatskaya and Konstantin Levin, who marry and pursue lives of homely “family happiness.” In his examination of these two different stories, Tolstoy creates a multitude of episodes of high life in Moscow and St. Petersburg (now Leningrad) and of country life in the district of Korazinsky. Tolstoy also contrasts the shallowness of Karenin, a public official who moves in a corrupt society, and the serious dedication of the idealistic landowner Levin. 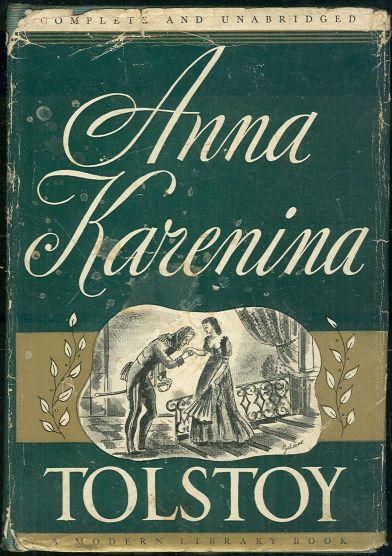 Tolstoy undoubtedly depicted his own nature in the personality of Levin, using this character to voice his observations on philosophy, agronomy, and religion. There is no doubt that Tolstoy drew many of the details of the novel from his own experiences, and the characterizations from his keen study of his relatives and friends. Thus he painted from real life the gambling scenes, the horse racing, the death of Levin’s disreputable brother, the hunting episodes, and the quaint naïveté of the peasantry.

Although the novel is distinguished for its fine evocation of the old order in Russia, its greatest strength lies in its brilliant characterizations. In his heroine Anna—a woman of sensitivity and honesty, who also possesses fears and weaknesses—Tolstoy has drawn one of the most unforgettable characters in all fiction. All of the major characters, as well as many of lesser importance, are delineated with equal precision. Despite some carelessness in style and occasional incongruities, Anna Karenina is a masterwork of both social history and fiction.