The animals that breathe through the trachea are those that perform their respiratory process through a system of branched tubes called tracheae.

The tracheas travel internally the body of the animal carrying oxygen to all tissues. Tracheal breathing is typical of both aquatic and terrestrial arthropods.

The entrance orifice of the tracheal tubes is called a blowhole or stigma. These are small pores that traverse the integumentary tissue. The entrance and exit of air through the tracheas occurs thanks to the movements of the abdomen. As mentioned above, arthropods are the animals that exhibit this type of breathing in particular. Insects, arachnids, crustaceans and myriapods belong to this group. 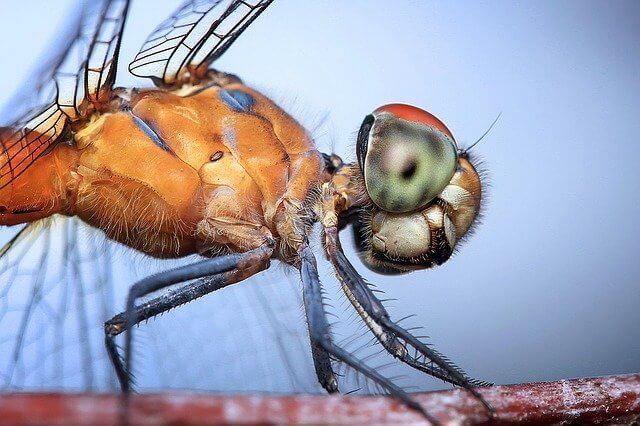 It is a simple or incomplete metamorphosis insect (hemimetábolos). That is, its transformation from larva to adult insect does not go through the pupa stage. In its adult form it is a winged insect with a very long abdomen, large eyes and short antennae. 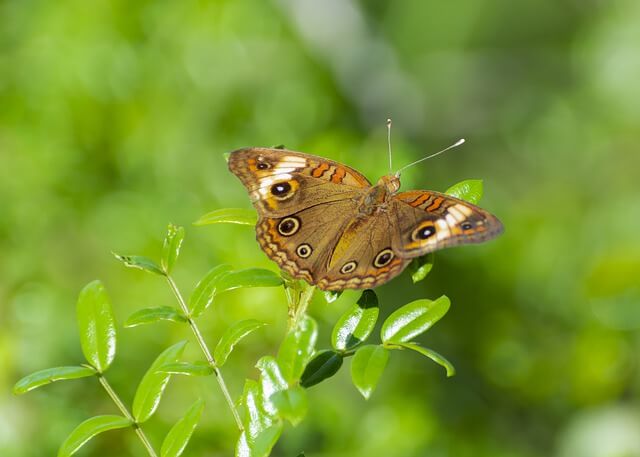 Insect of complete metamorphosis (holometabolos). That is, it goes through a process of development of several phases: embryo, larva, pupa and adult. Many of the species are recognized by the variety of colors and designs of their wings as well as their size.

It is an external parasitic insect without wings. It feeds on the blood of its guests and travels with jumps proportional to its size.

This animal belongs to the family of mites. They are external parasites that feed on blood. 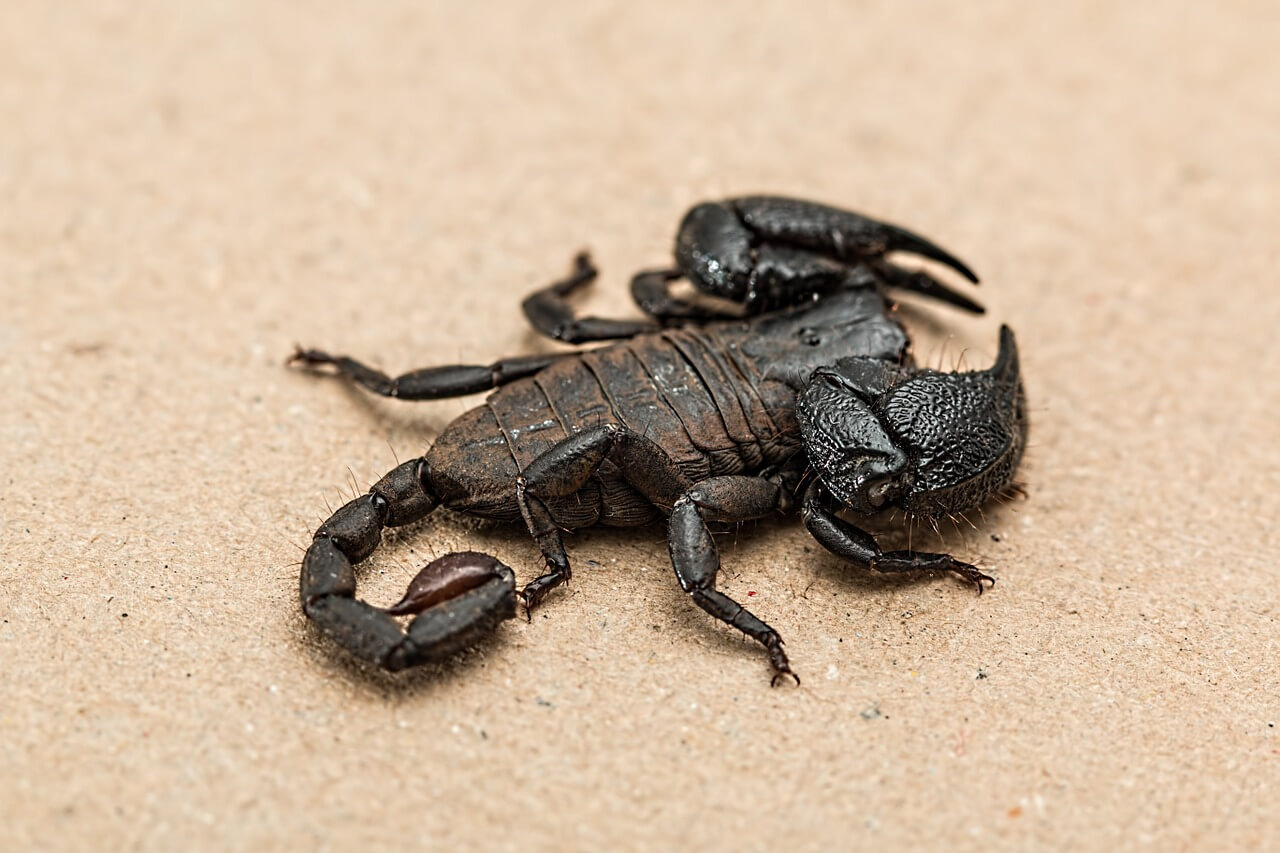 It is also known as the scorpion. Its elongated and curved tail that ends in a stinger provided with poison is one of its most particular characteristics. 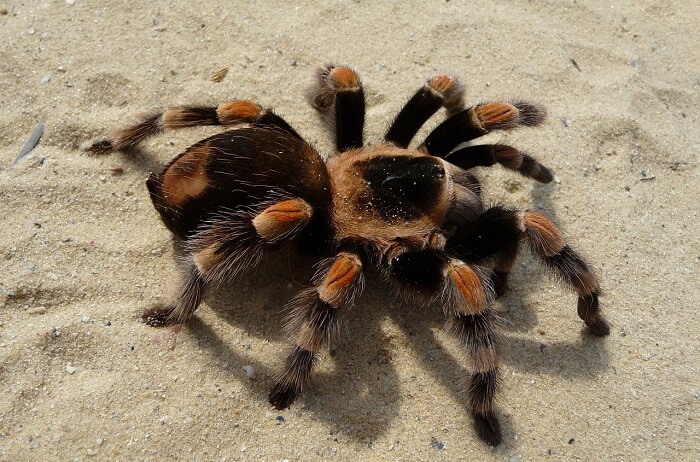 It is the common name given to several species of large spiders. They have the body and legs covered with hair. Some tarantulas can “shoot” hairs from your abdomen as a means of defense.

They are arachnids similar to spiders. They differ from them, in that their body does not present a division between the abdomen and the prosoma, they do not weave fabrics and they only have two eyes (the spiders have 8).

It is a marine crustacean. His body is rigid and is divided into three parts. It has two thick claws that serve to catch and crush their food or as a means of defense.

It is a flat and wide shell crustacean. Between the eyes it presents eight or ten pointed teeth similar to those of a saw. His first pair of legs are two black claws that he uses to trap his food and defend himself.

This arthropod has an elongated shape. Some species have a tubular shape and others flattened. However, the feature that identifies them mainly is that they have numerous little feet along the sides of their body.

They are tiny arthropods. His body is soft and have a pair of branched antennae in his head. On the sides of his body they present 9 to 11 pairs of legs.

In animals that breathe through the trachea, air enters through the spiracles. These have small bristles that filter the air and help to avoid the entry of foreign elements to the tracheas. They also have a kind of valves regulated by muscles that allow the opening and closing of spiracles.

The air that enters through the spiracles passes to the main tracheal tubes. From there it spreads by the ramifications of these. These branches have very thin tips that are filled with liquid.

The oxygen dissolves in this liquid and from there it expands towards the adjacent cells. Similarly, carbon dioxide gas is also dissolved and expelled through the tracheas.

Most of the arthropod cells are located next to the endings of the tracheal branches. This facilitates the transport of the gases involved in respiration without the need for a respiratory protein such as hemoglobin.

Some arthropods have the ability to control the entry and exit of air through the tracheal tubes. For example, when the abdominal muscles of the grasshopper contract, the organs press on the flexible tracheal tubes and force the air out of them.

When these muscles relax, the pressure on the tracheas decreases, the tubes expand and the air rushes. In some of the animals with tracheal breathing there are other organs that complement this type of breathing. Many spiders, for example, have one or two book lungs (lamellar or philotracheal lungs).

In these respiratory organs, air and blood flow through spaces separated only by thin sheets of tissue. A substance called hemocyanin in your blood that traps oxygen and turns blue-green as it passes through the lamellar lungs.

In the case of aquatic arthropods, there are various adaptations of their tracheal respiratory systems that allow them to breathe in the aqueous medium. Some have an external respiratory tube that they draw above the surface of the water. Through this tube, the air passes to your tracheal system.

Other aquatic arthropods use air bubbles that adhere to the spiracles and from which they take in the necessary oxygen while they are underwater. While others have spines on whose ends are spiracles.

They pierce with the thorns the leaves of the plants that are under the water and through the spiracles they absorb the oxygen from the bubbles that form inside the perforated leaves.

Structure of the Trachea

The trachea is an organ that has a very particular structure. Its walls are rigid enough to avoid compression by the weight of adjacent tissues.

This is because the tracheal walls are made up of spiral chitin fibers. However, the walls are also flexible so that they allow pressure to a certain extent, without undergoing deformations or the complete closure of the trachea.