Andrew Huxley; (1917-2012), British physiologist, who made important contributions to an understanding of how nerves and muscles function. He shared the 1963 Nobel Prize in physiology or medicine with John C. Eccles and Alan L. Hodgkin “for their discoveries concerning the ion mechanisms in the excitation and inhibition of the peripheral and central membranous sections of nerve cells.” 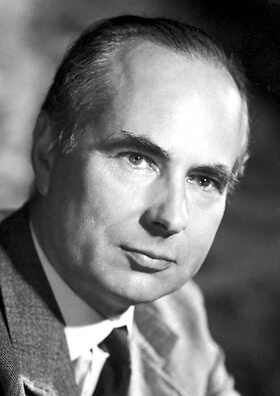 Andrew Huxley’s research began in 1939 when he worked with Alan L. Hodgkin. They developed a method for recording electrical changes inside the giant nerve fiber found in the squid and showed that the nerve impulse involved a transient reversal of the electrical potential differences across the surface membrane. This phenomenon, later found to be an almost universal property of excitable cells, was inconsistent with the classical theory and remained unexplained for eight years. Hodgkin, Huxley, and Bernard Katz showed that the effect arose from the difference in sodium concentration between the outside and the inside of the nerve fiber, and that is was caused by a selective increase in the permeability of the surface membrane to that ion.

Hodgkin and Huxley analyzed the phenomenon quantitatively and developed a mathematical theory that explained many features of the conduction mechanism. During the same period, Huxley also carried out important experiments with Robert Stampfli on myelinated axons, in which most of the nerve fiber is covered with an insulating layer, and the impulse travels in a discontinuous, or saltatory, manner.

In 1953, Huxley turned his attention to muscular contraction and developed an interference ihicroscope for studying the striation pattern in isolated muscle fibers. His work in this area contributed to the sliding filament theory of muscle contraction. Huxley also carried out difficult experiments, proving that the activation of muscle occurs at selected points that coincide with the openings of a network of cellular tubules. He also developed a mathematical formula that explains aspects of muscle contraction and made contributions to studies of the dynamics of contraction.

Andrew Fielding Huxley was born in London on Nov. 22, 1917, into a famous family that included biologist Thomas Henry Huxley (his grandfather), editor and author Leonard Huxley (his father), and biologist Sir Julian Huxley and writer Aldous Huxley (his half brothers). He was educated at University College School, Westminster School, and Trinity College, Cambridge. While at Cambridge, his interests turned from the physical sciences to biology, and in 1941 he was elected to a research fellowship in physiology at Trinity College. After World War II, during which he did operational research in gunnery, Huxley returned to physiological work at Cambridge, where he held various college and university posts. In 1960 he became Jodrell professor of physiology at University College, London and in 1969 a Royal Society research professor at the same university.