Andrei Andreyevich Gromyko; (1909—1989), Soviet foreign minister, a striking example of the type of Soviet diplomat that came to the fore after World War II. 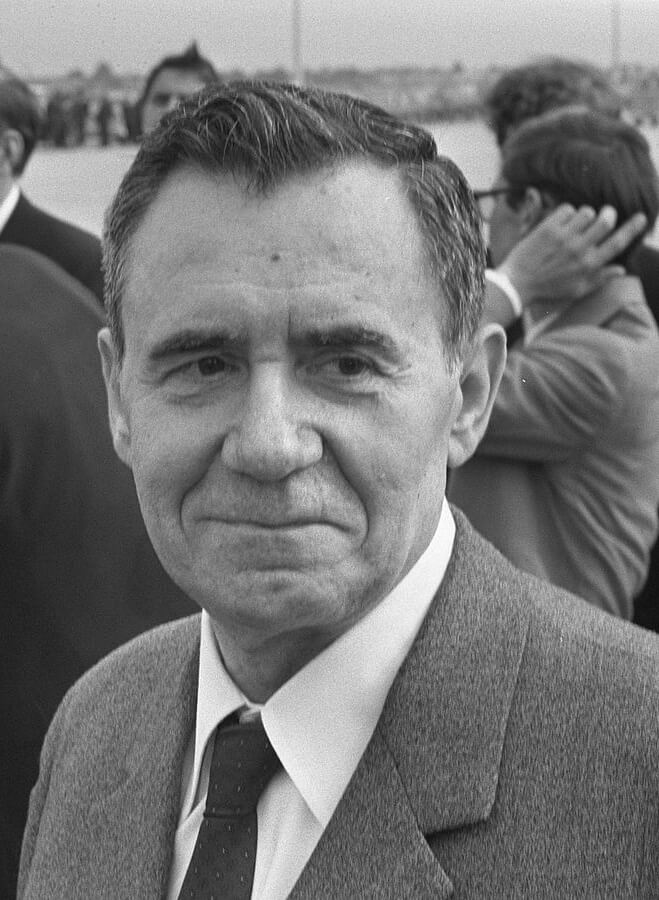 He was born on July 6, 1909, into a prosperous peasant family in the village of Old Gromyki in Belorussia. Evincing an early interest in agricultural science, Gromyko attended a professional technical secondary school and the college-level agricultural institute in Minsk. Graduate studies at the prestigious Research Institute of Agricultural Economics in Moscow led to his obtaining a doctorate in 1936. He embarked on a successful career in agricultural economics, serving as senior research associate at the Institute of Economics of the Soviet Academy of Sciences and as a member of the editorial board of the journal Problems of Economics.

In 1939, Gromyko, like many others in the universities and the government bureaucracy, was called into the foreign service, whose ranks had been decimated by the purges. His rise in the diplomatic corps was remarkable. He served first under Ambassador Maksim Litvinov as the counselor in the Soviet embassy in Washington. In 1943 he replaced Litvinov as ambassador in Washington. In this post, one of the most important in the Soviet foreign service, he took part in many international conferences, including those at Dumbarton Oaks, Yalta, Potsdam, and San Francisco. He became deputy foreign minister and permanent representative of the Soviet Union to the United Nations in 1946. Two years later he was appointed first deputy foreign minister. He remained second in command in the department of foreign affairs until February 1957, when he became the foreign minister.

Gromyko’s career spanned diverse periods of Soviet foreign policy that included the Soviet-Nazi accommodation, World War II, the cold war and coexistence. His service, under the brilliant Andrei Vishinsky, the taciturn and venerable Vyacheslav Molotov, the young and energetic Dmitri Shepilov, and the ebullient Premier Nikita Khrushchev, reflected not only his skill at personal accommodation but also the emergence of a diplomatic corps whose top officials served primarily as advisers to leaders of the Soviet Union and as executors of their policies.