Andrea Mantegna; Italian painter and engraver: b. probably at I sola di Carturo, between Vicenza and Padua, Italy, 1431; d. Mantua, Sept. 13, 1506. The adopted son and apprentice of the Paduan painter Francesco Squarcione from about 1441, he was exposed as a youth to Florentine artistic influences also (the painters Fra Filippo Lippi, Andrea del Castagno, and Paolo Uccello, and the sculptor Donatello, qq.v.), Squarcione himself may have introduced Mantegna to the art of classic antiquity, sparking an enthusiasm which increased throughout the pupil’s life. In 1448 Mantegna was painting on his own, and his contract with Squarcione was dissolved a few years later. In 1454 he married the daughter of the Venetian painter Jacopo Bellini. 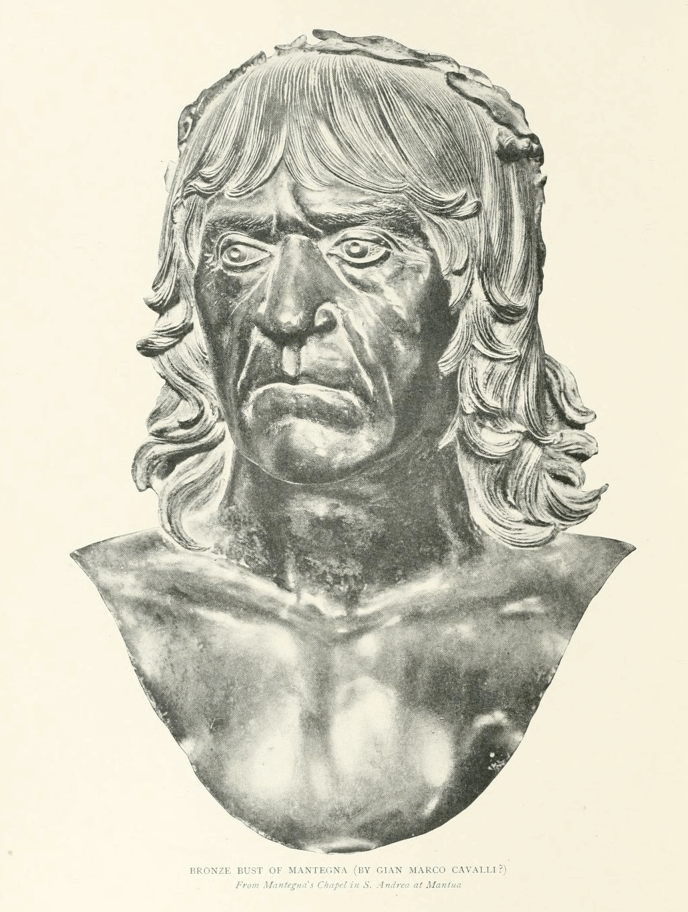 An early work of great importance was Mantegna’s series of frescoes on the lives of St. James and St. Christopher, in the Ovetari chapel of the Church of the Eremitani, Padua, begun about 1448 with Niccolo Pizzolo and finished by Mantegna working alone from 1454 to 1457. These frescoes survived until the World War II bombing of Padua in 1944, when all were destroyed except two which had been temporarily removed from the church. In about 1459 Mantegna finished one of his masterpieces, the altarpiece for San Zeno Maggiore in Verona, comprising the main triptych of the Madonna flanked by saints, and predella panels.

The latter are now in France—the center panel of the Crucifixion at the Louvre, Paris, and the side panels at the Tours museum. On Jan. 30, 1459, Mantegna was appointed court painter to the princely family o.f Gonzaga at Mantua, and he lived in this city from about 1460, with occasional trips elsewhere in Italy, until his death. Of the many frescoes painted for the Gonzaga family, only one now remains, the decoration of the bridal chamber (Camera degli Sposi) in the Gonzaga palace (finished in 1474), which depicts scenes of the family. 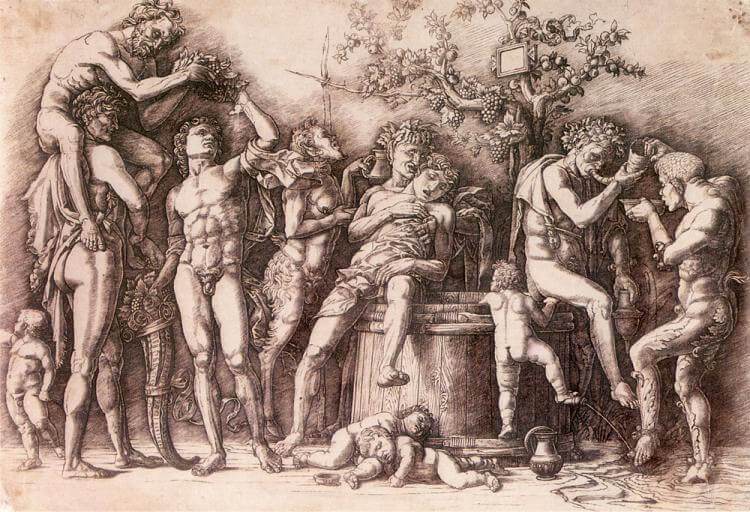 Nine murals entitled Trionfo di Cesare (Triumph of Caesar), painted on canvas between about 1482 and 1492, survive, although in poor condition, at Hampton Court, England. While engaged in these murals, Mantegna was called to Rome to decorate the papal Belvedere Chapel (since destroyed), and this contact with Roman antiquities during the years 1488-1490 influenced his painting greatly.

No artist of his time studied classical antiquities as eagerly as Mantegna, who acquired an extensive collection of Greek and Roman fragments. He continued to paint up to his death, but in his later years was eclipsed by such artists as Michelangelo. He was buried in a mortuary chapel frescoed by his son Francesco in the Church of Sant’ Andrea in Mantua. 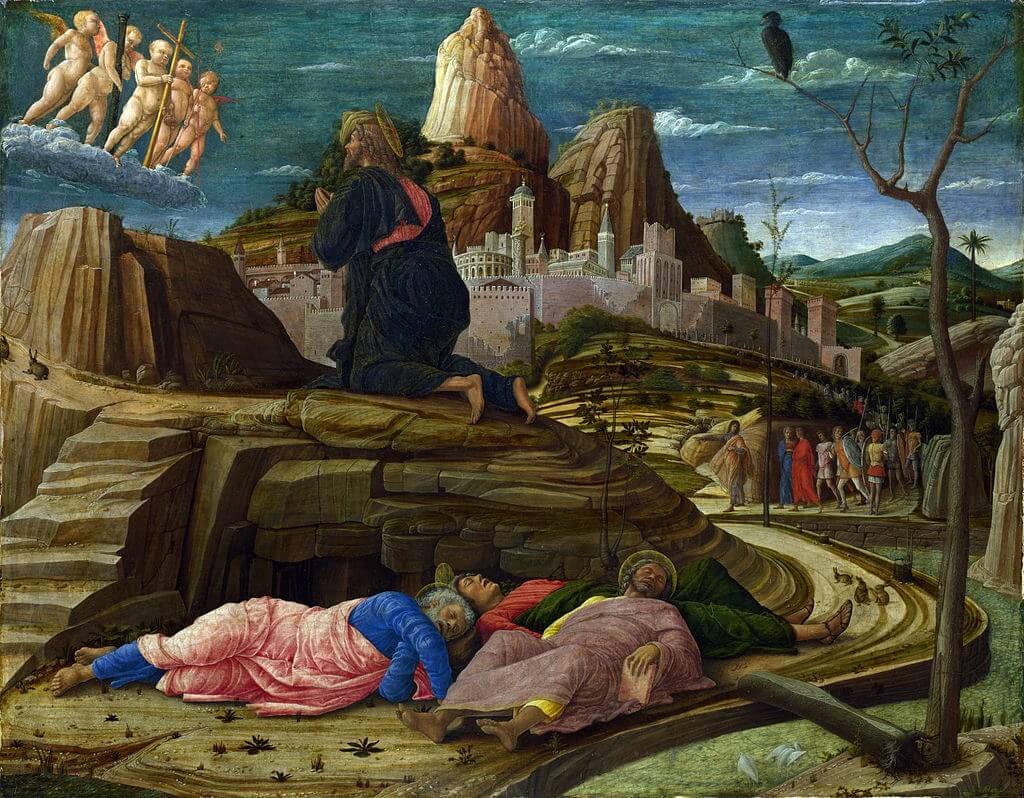 The Agony in the Garden (right panel of the predella of the San Zeno Altarpiece, 1455) National Gallery, London is the pinnacle of Mantegna’s early style

Mantegna’s art was essentially north Italian, although containing elements of Florentine, Venetian, and classic styles. He was the first great painter of the Paduan school and the foremost 15th century painter outside Venice. A perfectionist in anatomy, draftsmanship, and perspective, he endowed his figures with a singular intensity, and they have a sculptural quality which may mark the influence of Donatello.

Many of his works have been destroyed or survive in poor condition. Among those now displayed in museums are his panel depicting Jesus’ agony in the Garden (unknown date, National Gallery, London), and the following canvasses: Madonna della vittoria (1495-1496, Louvre, Paris) ; Parnassus (1497, Louvre), originally painted for Isabella d’Este, a Gonzaga by marriage; and Cristo morto (1506, Brera Gallery, Milan), the last-named a powerful study of the foreshortened human figure. Mantegna was also a pioneer in copperplate engraving. A number of engravings were produced at his shop, of which seven are attributed to Mantegna himself.