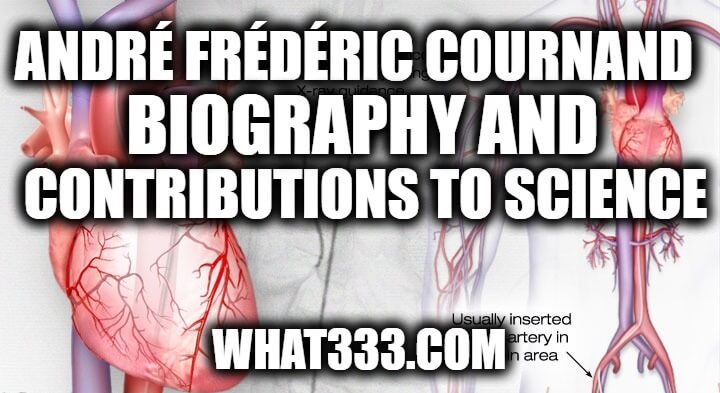 André Frédéric Cournand; (1895-1988), French-American physiologist who shared the 1956 Nobel Prize in physiology and medicine with Dickinson W. Richards and Werner Forssmann for “their discoveries concerning heart catheterization and pathological changes in the circulatory system.” Cournand was responsible for providing much of our present knowledge of heart and lung diseases. He and his colleagues demonstrated how much could be learned, with safety, of the functioning of the human body by the application of physiologic methods to medicine. 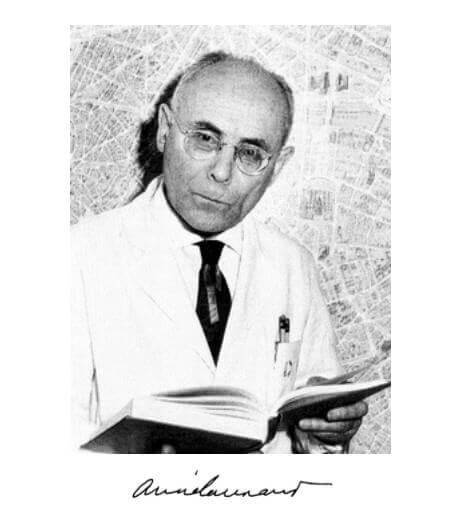 In 1929, Werner Forssmann showed by experimentation upon himself that it was possible and safe to pass a long thin tube or catheter from an arm vein into the right side of the heart. However, it was not until 1941 that Cournand and Richards began to develop the potential of this method to measure the pressure in the heart and great vessels, to determine blood volume and the amount of blood pumped, to measure the rate of bood flow and pressure, and to take samples of blood for analysis. They found that by analyzing the oxygen content of blood samples from different parts of the heart, they could determine where there was abnormal communication between heart chambers.

Cournand went on to work on special catheters that could be passed into the human heart and needles that could be inserted into arteries. These discoveries were important technical improvements in providing for the safety of patients. The catheters were opaque enough to be seen by X-rays but not so stiff that their introduction into the heart would be dangerous. One of the catheters was designed with a double lumen which permitted pressure to be measured simultaneously in two contiguous heart chambers and large vessels. Cournand, together with Janet Sterling Baldwin and Aaron Himmelstein, described these techniques in the monograph Cardiac Catheterization in Congenital Heart Disease (1949).

Cournand’s later work was concerned with the regulation of pulmonary circulation in normal patients and in patients with cardiopulmonary disease. As a teacher, he trained many investigators in the scientific methods of studying the functions of the heart and lungs in man.

Cournand was born in Paris, on Sept. 24, 1895. He obtained his bachelor’s degree at the Sorbonne in 1913 and the diploma of physics, ehemistry, and biology a year later. His medical studies, begun in 1914, were interrupted by service in the French army from 1915 to 1919. At the end of the war he resumed his studies and was awarded the M. D. degree of the Faculte de Medecine de Paris in 1930.

Cournand moved to the United States in 1930 and became a citizen in 1941. Beginning in 1931, he collaborated for many years with D. W. Richards at the Columbia University Division of Bellevue Hospital in New York. He began teaching at the Medical College of Physicians and Surgeons at Columbia University in 1934 and was appointed professor of medicine in 1951. He became emeritus professor of medicine in 1964.

Dr. Cournand was on the editorial boards of several publications, including Circulation, the official journal of the American Heart Association, and American Journal of Physiology.