The Egyptians developed their science for strictly utilitarian purposes, and their approaeh was empirical.

They developed arithmetic to evaluate amounts of agricultural and industrial produets; geometry, to survey fields, reassess land after the Nile inundation, and ealeulate volumes for building; astronomical observation, to orient structures and keep calendars and religious festivals. There is no evidence of theoretical science.

Egypt, nearly rainless, was fortunate to be watered by the Nile and its inundation, which occurred yearly at regular dates. This regularity pervaded all aspects of Egyptian civilization. Basin irrigation by means of a system of canals and dikes was known from protodynastic times, and the canal curator became a nome administrator. Irrigated land was the only kind forming the nome structure (sepat), written with a hieroglyph representing a grid of canals. Because of the encroachment of flood waters, the boundaries of the nomes and fields had to be perennially reassessed, canals cleared, and dikes restored to their original measures as recorded in the cadaster. Herodotus believed that geometry was invented in Egypt. 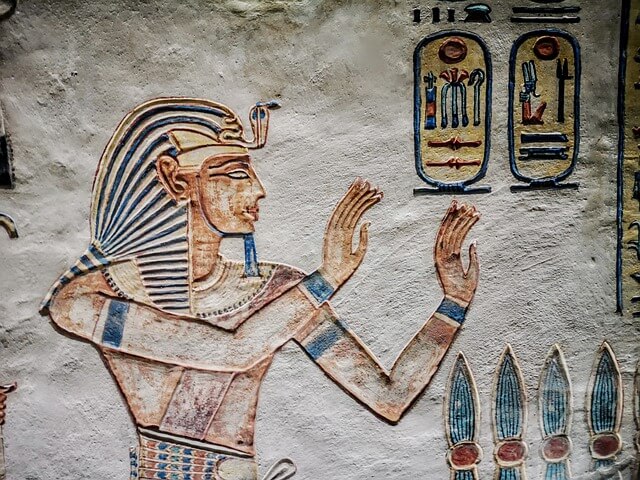 Arithmetic comprised addition and subtraction, into which multiplication and division were transformed. Fractions other than % and % had 1 as numerator: thus %2 was expressed as Vs + Vi6 + %2- Geometry was essentially empirical, but it reached an astonishing precision in its approximations. The Egyptians could ealeulate the area of a square, trapezoid, triangle, and circle (the latter by squaring % of its diameter); the height and angles of a pyramid; and even the volume of a cylinder and a truncated pyramid.

Several mathematical papyri present solutions of problems like evaluating the amount of grain in a granary or the number of bricks necessary to build a ramp, and contain a table of division by 2. The practical value of Egyptian mathematics is proved by the colossal monuments it helped to build.

The Egyptians soon observed that the inundation of the Nile began on the first day on which the Dogstar Sirius could be seen in its heliacal rising—just before sunrise. Agriculturists and priests followed this exact year of 365% days, instead of the simpler but inexact civil year of 360 days (plus 5 “days-upon-the-year”), subdivided into three seasons, each of 4 months of 30 days. The seasons were “inundation” (July-September), “vegetation” (winter), and “harvest” (summer). The day had 24 hours, 12 of day and 12 of night, and this constant ratio implies that the hour varied in length according to the season. See also Calendar.

Popular belief attached magical significance to the days of the year. Calendars of lueky and unlucky days have survived. 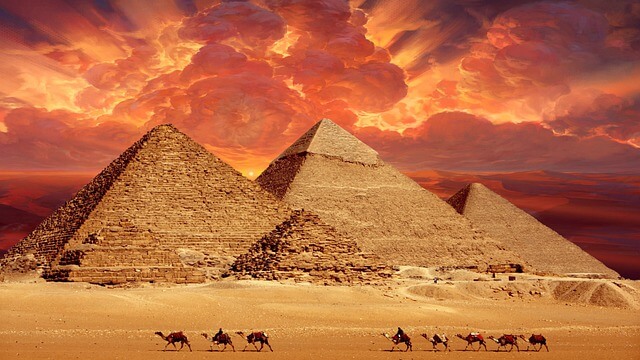 Some Egyptian medical works are as early as the 12th dynasty. Specialists in medicine and surgery treated Pharaoh Sahure of the 5th dynasty, and according to tradition Imhotep, vizier and architect of Pharaoh Djeser (Djoser) of the 3d dynasty was also proficient in medicine and was later deified as Imuthes (Imouthes). Medicine was taught in the temples of Atum at Heliopolis and Neith at Sais, where specialists bore the title of priest.

Curiously, anatomical knowledge as evinced by the medical papyri does not reflect the daily practice of opening up and eviscerating bodies for embalming. The vascular system, essentially the veins and arteries, was thought to carry also air, water, and other elements. Neither the location nor the extent of the vessels was clearly defined, though they were held to be the source of various troubles. Diagnosis showed scientific observation, while prognosis preseribed ointments, potions, and pills prepared with various vegetable ingredients, the fat or blood of animals, and or even peculiar ingredients such as parts of animals or excrement in a medium of honey, oil, fat, or water. Medicine was administered with a suitable incantation against the demons eausing the disease. Surgical papyri show a more scientific diagnosis and appropriate treatments of wounds.

Eye ailments were the most numerous—about one tenth of the total. They were followed closely by intestinal troubles due to worms and by women’s diseases. Other afflictions ineluded tuberculosis, rheumatism, gout, and smallpox.

The Egyptians took as much care to preserve the body after death as they did to keep it in good health during life, since it was essential for existence in the nether-world. Pre-dynastic burials were preserved from putrefaction through their eontact with the hot dry sand, but later ones in more elaborate tombs decomposed, even though tightly bandaged. 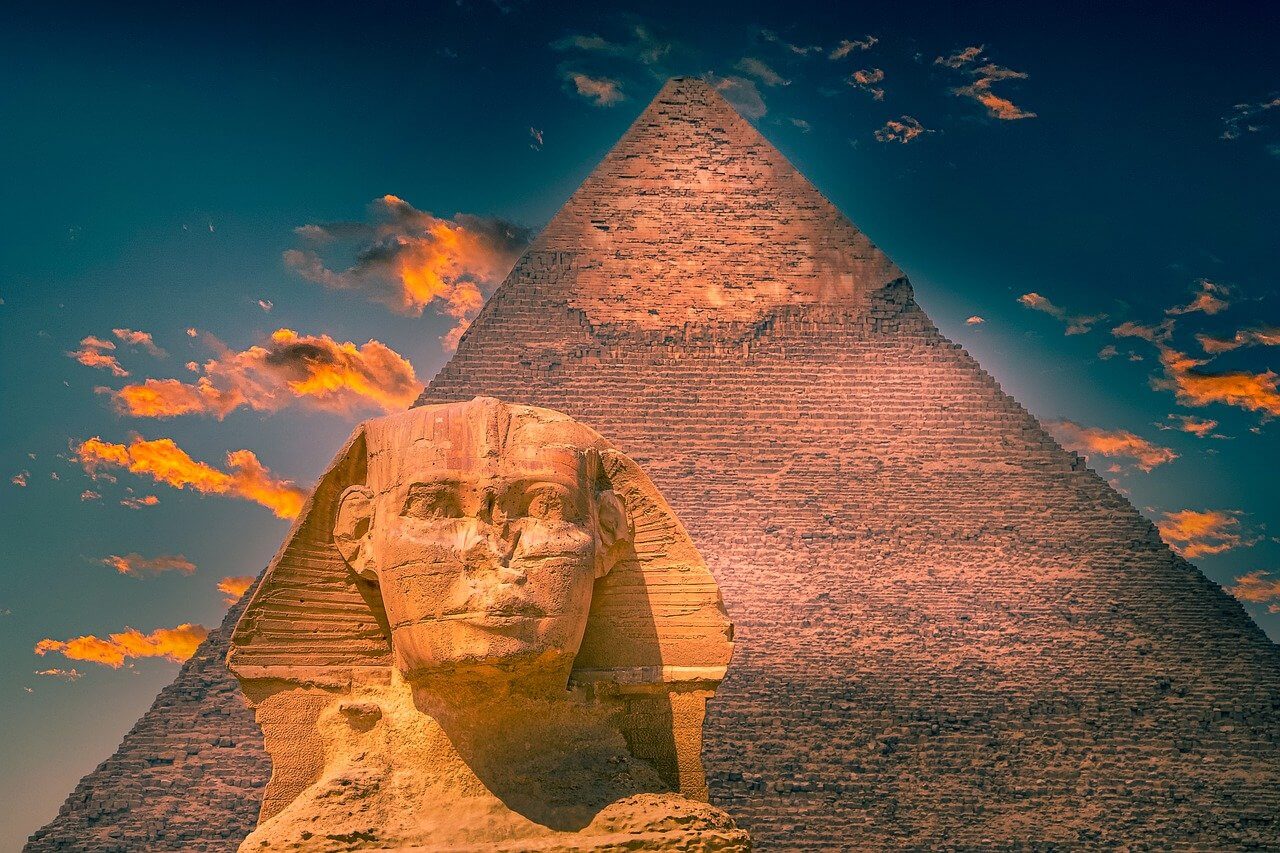 Few mummies are known before the New Kingdom. They show erratic attempts at dehydration, with the brain or viscera removed as in the New Kingdom. Herodotus specifîes a duration of 70 days for the embalming, half being for the desiccation in dry natron after the brain and viscera had been removed to be treated separately. The body was then packed with linen and the incision on the left side of the abdomen sewn up and covered with a plate representing the “sound eye” of Horus. Wads or artifîcial eyes were plaeed in the eye sockets. The body, covered with ointments, spices, and resin, was wrapped in extensive bandages that gave it some semblance of the shape it had before dehydration. The packing process reached its apogee in the 21st dynasty, when the internal organs were replaced within the body. Later, no more than careful wrapping was done.

The mmnmy was protected by amulets and searabs placed on the body and within the bandages. The heart scarab, placed on the breast, was inscribed with a spell asking the heart not to testify against the deceased on the balance of judgment. The minor organs, placed in the four Canopic jars, were under the protection of the four sons of Horus: Amset (liver), Hapy (lungs), Duamutef (stomach), and Qebehsenuf (intestines).

Animals sacred to various gods were also mummified, especially in the Greco-Roman period, and were stacked in layers in extensive » underground galleries. The animals included the Apis bulls at Saqqara, the ibis and ape of Thoth at Saqqara and Hermopolis-West, and the cat of Bastet at Bubastis.

Egypt was particularly favored with all kinds of “eternal stone” for building: limestone on the edge of the Eastern Desert, especially at Tura; alabaster at Wady (Wadi) Gerrawy and Hatnub; sandstone at Gebel Silsila; pink granite at Aswan; and black granite in the Wady Hammamat. All quarries except those at Wady Hammamat were located along the Nile, the natural route for transport by barges. Even monolithic obelisks of 33 meters (108 feet) were sailed downstream from Aswan to Memphis. Land routes, such as those at Hatnub, were built in the desert. They were carefully cleared of boulders and pebbles and filled in across depressions. Such routes as the long, arduous Wady Hammamat had to be lined with wells that could provide water for 2,250 workmen, 50 oxen, and 200 donkeys.

The monuments were dressed in the quarry and transported on sleds hauled by oxen or men, as many as 172 in four rows for the statue of Djehutihetep, nomarch of Bersha. The faces of a hail in a covered quarry were maintained vertical, blocks being detached by tapping on wedges in a row of horizontal slots at the base. In open quarries the floor was stepped and marked with lines in red ocher for the separating channels that would be made. Granite recruired removing the top layers by fîre-heating and pouring water on them, then pounding separating trenches with dolerite balls along rows of test-holes one meter apart. Markings on the walls of the trench along the unfinished obelisk at Aswan show that gangs of men worked squatting, each pounding along his 2-foot (60-cm) length of trench. 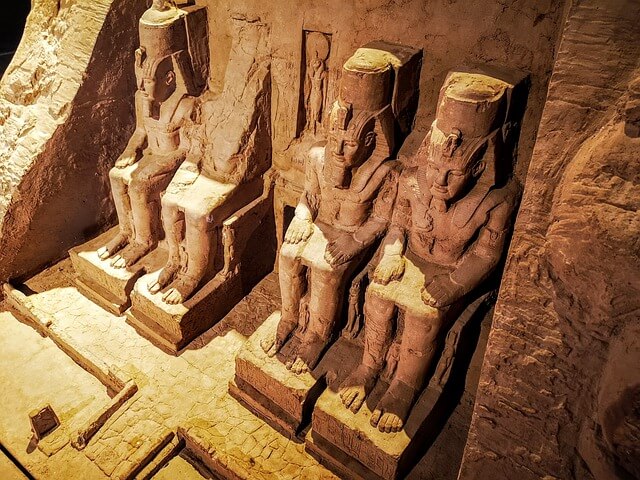 The metals most exploited by the Egyptians were gold and copper. Gold was extracted by washing alluvium or ground quartz from the veins in the central hilly range between the Nile and the Red Sea. A unique papyrus map of the gold mines from the reign of Seti I shows two parallel valleys between two ranges of peaks where the gold ores were exploited. Copper ores in the Eastern Desert and Sinai were smelted near the mines by burning a mixture of charcoal and crushed ore. Smelting installations existed at Buhen since the 4th dynasty, and epigraphic evidence describes the active exploitation and import of gold and copper from Nubia since the time of Senusert I. Lead and silver were extracted from ores near the Red Sea. Also used was electrum, an alloy of gold and silver in the ratio of 2 to 3. Iron, though known, was little used before the Late and Greco-Roman periods.

Tomb scenes represent the melting of metal in open clay crucibles on a charcoal fire activated by blow pipes and, from the New Kingdom onward, by foot bellows. Bronze, produced by adding tin to copper, was made locally or imported since the Middle Kingdom. Copper blades were east in open molds of clay. Metal was weighed in a balance before being worked, as were metal instruments before they were issued to artisans and after they were returned.

The impressive architecture of ancient Egypt implies labor organization and developed building techniques. Of the hundreds of representations of buildings, only a small number can be called architectural drawings. Papyri and ostraca show dimensioned plans and elevations similar to modern ones, though less regular, with approximate scale and projection. Already in the 3d dynasty, a curve defined by its coordinates could be drawn. Architectural models were presented as ritual offerings but there is no definite proof that they were used in the building process.

A building site was levelled, and when on rock it was dressed. Tomb scenes and statuettes represent the surveyor holding a roll of cord when measuring land and laying out a building. Foundations were, surprisingly, little more tiran shallow trenches flooded with plaster when in desert ground (Amarna), or filled with small blocks on a layer of dry sand when built on agricultural soil (Karnak). A common type of stone masonry consisted of two well-dressed facings enelosing a filling of rubble. Brickwork was always massive (solid brick), with the exception of ramps filled in with sand or earth.

Large stone blocks lashed fîrmly onto sleds were pulled up ramps and embankments that rose as the strueture grew in height. Rollers and sleepers of acacia wood reduced friction. The use of pulley or tackle was unknown, but capstans, inclines, levers, and props were available. Blocks lashed onto wooden rockers could have been raised by the repeated insertion of large wedges beneath the runners—the two side-pieces of the rocker, shaped like segments of a circle and connected by transverse bars. Rockers could also have served in the adjustment of a course of blocks during the process of dressing.

When the blocks were set to fit in their courses, they were dressed on the sides forming bedding and rising joints. Often the rising joints were oblique rather than vertical. Fluid mortar was used, not as a binding but as a lubricant to ease the shifting of blocks. Dovetails of wood, lead, or copper were employed.

Huge monolithic pillars were ereeted by slipping them down an incline into a hole prepared in the pavement (mortuary temple of Khafre) or by letting them down into a floor of sand (Osireion of Seti I at Abydos). Columns, whether monolithic in form or made of superimposed drums, were dressed from scaffoldings.

Pyramid construction presented many problems in addition to that of raising the blocks by means of ramps. Such problems ineluded the avoidance of twist and the maintenance of the true angle of incline before the casing blocks were dressed. The final dressing of the outer faces proceeded from the top dowmvard as the embankments were removed.