Alessandro Scarlatti (2 May 1660 – 22 October 1725) , Italian composer, who was the founder of the Neapolitan school of opera. He was born in Palermo, Sicily, on May 2, 1660. As a boy he was sent to Rome to study music with Giacomo Carissimi, a renowned composer of oratorios. In Rome, while still very young, Scarlatti became maestro di cappella to former Queen Christina of Sweden. He similarly served the viceregal court at Naples in the 1690’s. In 1703 he became assistant to Antonio Foggia at the Roman Church of Santa Maria Maggiore, succeeding Foggia as maestro in 1707. 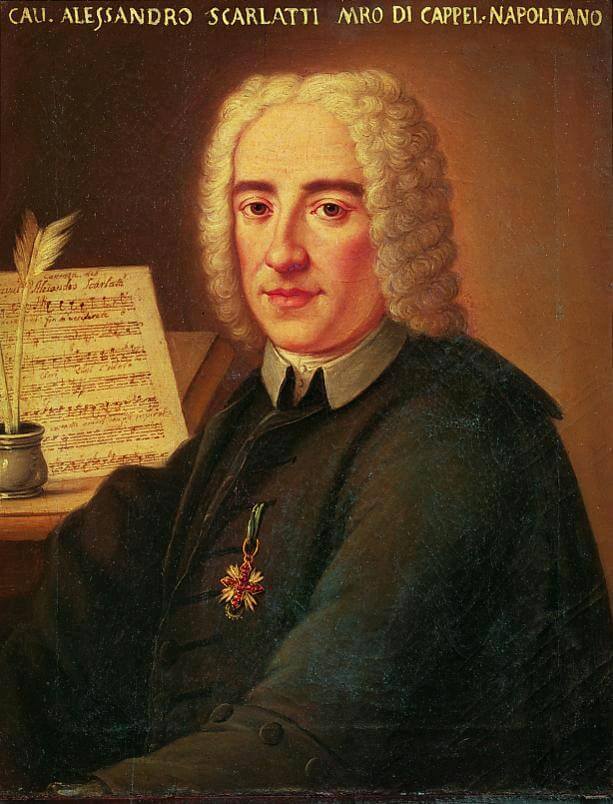 After 1709 he returned to Naples to head the royal chapel. Scarlatti also taught briefly at the Conservatorio di Santa Maria di Loreto, in Naples, but he chiefly took in private pupils, the most renowned of whom were his son Domenico Scarlatti and the North German opera composer Johann Adolf Hasse. Scarlatti died in Naples on Oct. 24, 1725.

Although Scarlatti wrote in most of the musical forms current during his lifetime, his reputation was made mainly as an opera composer. He wrote some 115 operas, of which about 50 survive. Not all of these, however, are in full score. He conducted the earliest known of them, Gli equivoci nel sembiante (also known as L’errore innocente), in Rome before his 20th birthday. His later operas became stylistically noteworthy for his increasing use of the aria da capo, an essentially musical rather than dramatic device, and for his employment of recitatives accompanied by orchestra rather than the usual harpsichord.

Scarlatti’s operas strongly influenced Handel and other composers of opera seria. In the later eras of “reform,” however, they were decried as antidramatic because of their concentration on the music and neglect of stage action. His other compositions, many of which are of the highest caliber, include about 14 oratorios, perhaps 200 Masses, much other sacred music, madrigals, some 700 cantatas, serenatas, duets, sinfonie for small orchestra, chamber music, and numerous harpsichord solos.