Alben William Barkley; (1877-1956), American political leader, who was vice president of the United States (1949-1953). Barkley took a more active role in government than most vice presidents before him. His personal popularity lifted him still further from the traditional obscurity of his office. He was affectionately called “the Veep”—a nickname that clung to him even after he retired from office. 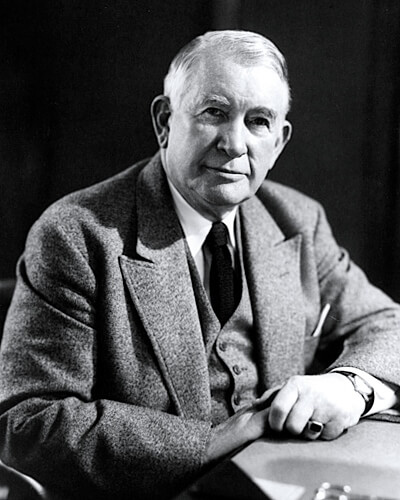 He was born in Graves County, Ky., on Nov. 24, 1877, the son of a poor tobacco farmer. Following graduation from Marvin College in Clinton, Ky., he studied law at Emory College, Oxford, Ga., and the University of Virginia. He practiced law in Paducah, Ky., from 1901 to 1905, when he became prosecuting attorney of McCracken County. He was judge of the Mc-Cracken County Court from 1909 to 1913.

Barkley was elected to the U.S. Congress as a Democrat from Kentucky’s 1st district in 1912. He served seven terms before entering the U.S. Senate in 1927. During four consecutive terms as senator from Kentucky he became a national figure, first as a ranking minority leader and, for 10 years beginning in 1937, as majority leader. He was an influential spokesman for the legislative programs of Presidents Franklin D. Roosevelt and Harry S Truman. He was instrumental in guiding much of the New Deal legislation through the Senate, and he consistently supported Truman’s Fair Deal program.

In 1948, Truman chose Barkley as his presidential running mate. Following their election, Truman determined not to repeat Roosevelt’s practice of excluding the vice president from top-level meetings. He appointed Barkley to the National Security Council and consulted him on foreign and domestic issues. After leaving the vice presidency in January 1953, Barkley won back his old Senate seat in the 1954 elections. On April 30, 1956, he died suddenly while making a speech at Lexington, Va.