Agate; is a special type of chalcedony, a quartz mineral. It has a characteristic banded or layered structure and is used chiefly as a gem stone. Agate is formed in rock cavities by the deposition of layers of chalcedony on the walls of the cavity. The layers may fill the cavity completely or leave an opening, often lined with projecting quartz crystals, in the center. Agate is cryptocrystalline; that is, its crystals are so fine that they are not visible through a microscope.

According to Theophrastus and Pliny, agates were so named because they were found along the Achates River in Sicily, now known as the Acate or Dirillo. Agate is mentioned in Exodus 28:19 as one of the stones in the high priest’s breastplate, but the actual character of the original stone is not known, because in antiquity gem names often were applied to substances now known to be different mineral species.

Although agates are found in both igneous and sedimentary rocks, those of good quality are taken chiefly from igneous rocks of basaltic character. They vary in size from that of a pea to two or more feet in diameter. Because the quartz of which they are composed is more resistant to weathering than the rocks in which they occur, agate masses may be found loose on the ground or in stream or beach deposits.

Originally the agate material was in the form of a silica gel; that is, somewhat like a coarse and very porous sand. The impurities in the material separated and then hardened in successive bands. The bands are closely spaced, and each of them consists of multitudes of minute quartz crystals. In exceptional cases the bands are evenly spaced. In most agates, however, the banding is not pronounced, and practically all gem agates of commerce are artificially colored. This is possible because the agate layers, although they appear compact to the eye, have varying degrees of porosity. 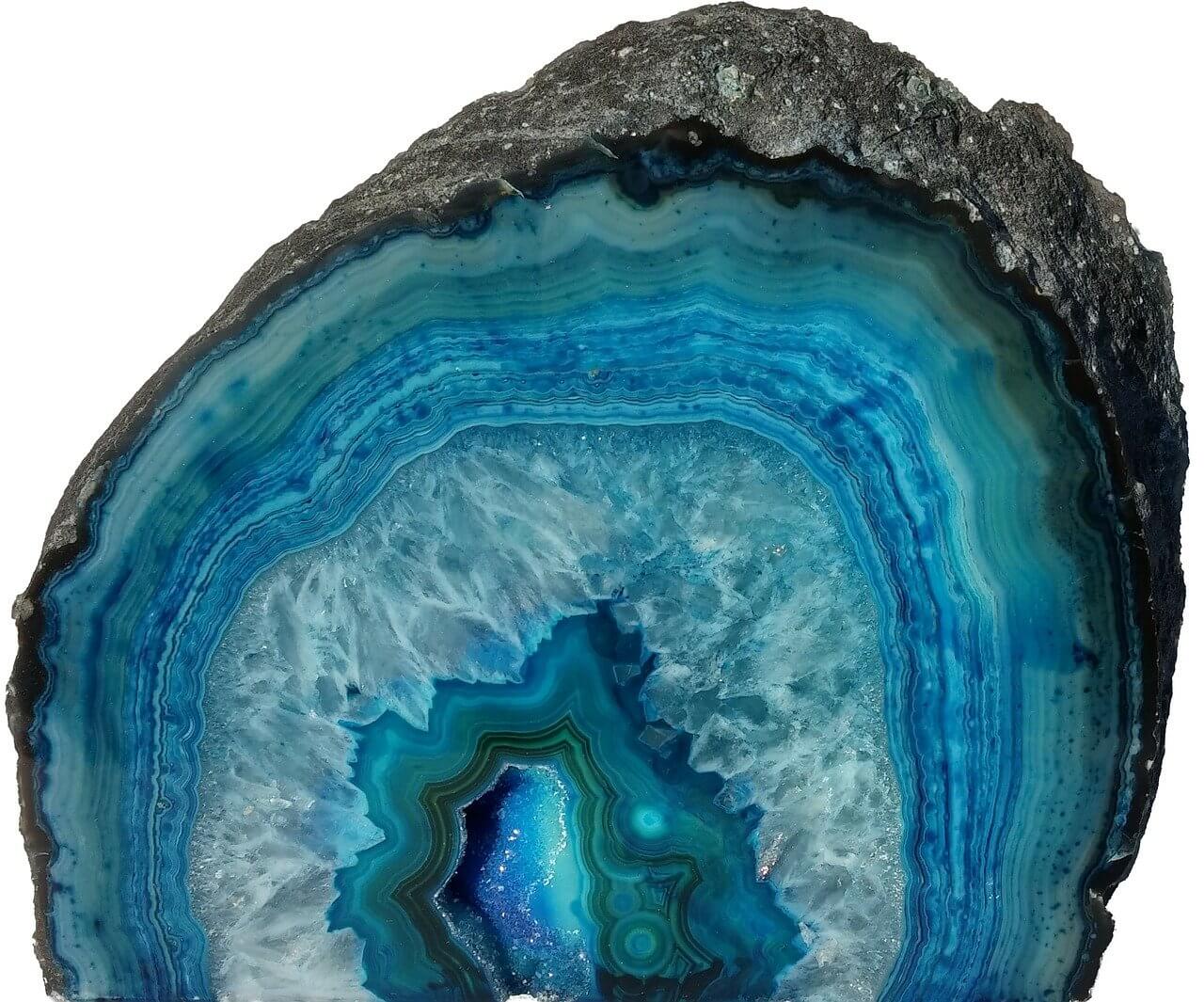 The commercial dyeing of agates began on a large scale about 1820 in the Idar-Oberstein district of western Germany. Because of the occurrence of a fine grade of agate in this area, an agate-cutting industry had developed there as early as the 16th century. The original dyeing process consisted of drying the agate thoroughly and then immersing it in a honey solution for several days until the solution had penetrated the stone. The agate was then boiled in concentrated sulfuric acid which charred the honey to carbon, the carbon being precipitated in the interstices of the apparently solid agate. Some nonporous layers remained white, while others varied from light brown to black, depending on the porosity of the agate. Most of the acid was then removed by washing and the remainder by heating the agate for several days. Sugar solutions and sulfuric acid are now more commonly used.

A wide range of color can be produced. The dried agate is first placed in a solution of an iron, chromium, or cobalt salt. The saturated agate is then placed in a second solution that causes an insoluble compound to precipitate in the stone. An iron salt followed by ammonia precipitates iron hydroxide, which is converted into reddish or black iron oxide on heating. Using potassium thiocyanatc instead of ammonia produces a red color, while potassium ferrocyanide produces Prussian blue. Aniline and other organic dyes have also been used. The depth of color produced depends on the porosity of the layers of agate. 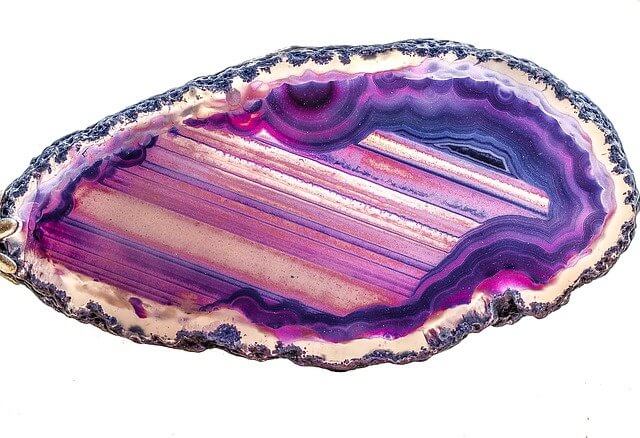 The Idar-Oberstein district has also been the world’s most important cutting center for semiprecious stones. Before World War I the industry was strung out along the Idar Valley, and each little cutting plant, employing 4 to 20 workmen, was supplied with power from its own water wheel. The cutting was done on a sandstone wheel 5 feet in diameter and IV2 feet thick, mounted on a horizontal shaft at or near the floor level. To cut the larger agates the workman lay face down on a crude wooden framework pivoted at the floor, with his feet braced on a floor cleat to the rear.

The agate was forced against the rotating wheel by a stout stick that ran from near the base of the pivoted framework on which the cutter lay. This crude device multiplied by leverage not only the leg thrust of the workman but also the forward thrust exerted by his body weight. Smaller pieces of agate were cut by a workman sitting on a stool in front of the wheel, holding the stone in one hand and forcing it against the wheel by a wooden stick held in the other hand.

Gem engraving, the cutting of cameos and intaglios, is a specialized branch of the industry calling for considerable artistic talent. Pieces of dyed agate with two sharply differentiated colored layers, usually black and white or red and white, are cut into rough blanks of ring size. A figure is cut into one layer, while the other layer forms the background for the design. In cameos the design is in relief. In the early years of the 20th century many ornamental objects were cut from agate, but the demand for them did not revive after World War I.

With the economic recovery of Germany after World War I, electric power began to displace water power, and the cutting equipment was modernized. Smaller silicon carbide grinding wheels rotating at much higher speeds displaced the cumbersome sandstone wheels. The cutting and faceting of semiprecious stones began to outrank agate cutting in importance, and some diamond cutting was also done in the district. The local sources of agate had long since been exhausted, and most of the stones still being cut were imported from Uruguay and Brazil. A major factor in the decline of the agate industry, however, was the loss of popularity in the jewelry markets.

Although agate cutting has declined as a commercial industry, a large group of amateur lapidaries has grown up in the United States. Because agate is one of the most plentiful gem stones and is comparatively easy to work, it has been by far the most popular for amateurs to cut. While much agate is imported, the American lapidary is usually a collector who prefers to obtain his own material in the field. This activity has resulted in the discovery of many new sources of supply, especially in Oregon, California, Washington, and Montana, to supplement the older known localities in the Lake Superior district.

Because of its mode of formation, the colored bands within the agate take on a great variety of patterns. These patterns have inspired descriptive names such as moss agate, eye agate, tree agate, and scenic agate. Agates of these types are the most highly prized by lapidaries. Although many lapidaries in the United States cut and polish small pieces for mounting in jewelry, it is commoner practice to saw the agate into sections and impart a high polish to the flat surfaces.

Those dense, compact varieties of agate that are not readily susceptible to artificial coloring find an important use in industry. Because large pieces of uniform texture are readily available, and since agate is harder than most other materials, it has long been the best material for mortars and pestles. It takes a fine edge and does not tarnish or corrode, and so is used for knife edges and for the flat fulcrums on which the edges rest in precision balances.