Adolf Erik Nordenskiöld; Swedish geologist and Arctic explorer: b. Helsingfors, Finland, Nov. 18, 1832; d. Stockholm, Sweden, Aug. 12, 1901. Nordenskjöld was educated in Finland at the University of Helsingfors by his father, Nils Gustav Nordenskjöld (1792-1865), a mineralogist, with whom he explored parts of the Urals. He was graduated in 1857, and in 1858 became superintendent of the mineralogical department of the Swedish Royal Museum in Stockholm, having been forced to leave Finland by the Russian authorities, who took umbrage at his political views. 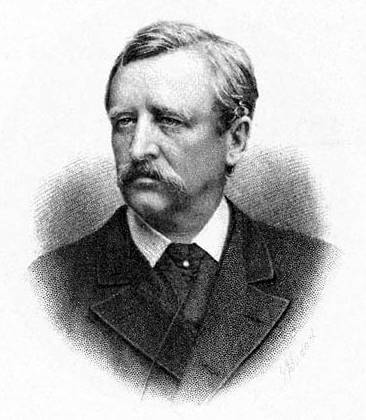 In all subsequent Arctic expeditions sent out by the Swedish government he took part, accompanying Otto Martin Torell to Spitsbergen (Svalbard) in 1858 and 1861, and being leader himself in 1864 and in 1868, when he attained 81° 42′, the farthest north at that time reached on board ship. Oscar Dickson, a wealthy merchant of Göteborg, who had contributed to previous exploration funds, made it possible for Nordenskjöld to explore Greenland in 1870; a preliminary expedition yielded important discoveries of algae and meteorites, and he penetrated the island farther than had ever been done before. In 1872, after serving two years in the Swedish lower house of Parliament, where he allied himself with the Liberal Party, Nordenskjöld set out on the fifth expedition, which wintered in Mossel Bay, whence with a few comrades he pushed north in the spring of 1873 on sledges.

In 1875 and 1876 he led the expeditions sent out by Dickson across the Kara Sea and up the Yenisei River. These were mere preparations for his great exploit in 1878-1880, when he accomplished the Northeast Passage, the dream of explorers for over three centuries. He left Karlskrona in the Vega June 22, 1878; wintered in the ice near Bering Strait, and reached Yokohama Sept. 2, 1879, and returned to Europe by the Suez Canal. He was created a baron in 1880. In 1883 he again explored Greenland from the west coast, beating his previous record of the farthest inland.

The remaining years of his life were spent in the study of early cartography, his publications in this field being Periplus, an Essay on the Early History of Charts and Sailing Directions (1897) ; an edition of Marco Polo, in French with facsimile (1882) ; Bidragtil Nordens dldsta historia (1892), in honor of the American Columbian celebration, and accompanied by the earliest maps of North America. Most of his important explorations were also described by his pen.