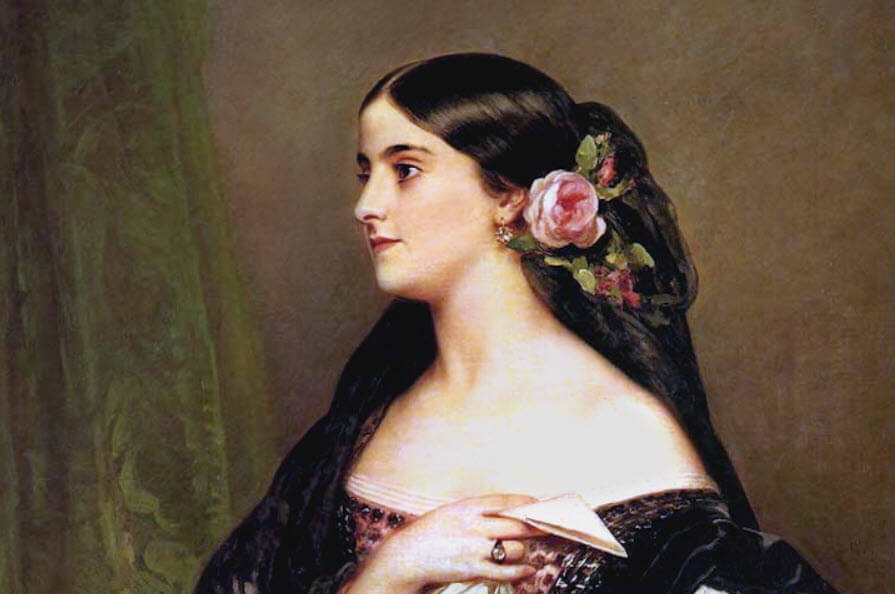 Adelina Patti; Italian soprano: b. Madrid, Spain, Feb. 19, 1843; d. Brecknock, Wales, Sept. 27, 1919. Taken to New York by her parents, both operatic singers, she sang in concert there at the age of eight Her sister Carlotta taught her piano, and her half brother Ettore Barili was her first singing teacher. As “The Little Florinda,” Patti made her stage debut as Lucia in Gaetano Donizetti’s Lucia di Lammermoor in New York on Nov. 24, 1859; her London debut as Amina in Vincenzo Bellini’s La Sonnambula on May 14, 1861; her Paris debut in the same role on Nov. 19, 1862; and her debut at La Scala, Milan, as Violetta in Giuseppe Verdi’s La Tra-viata on Nov. 3, 1877, everywhere arousing unparalleled enthusiasm. She retired from opera in 1895, but sang in concert until an official farewell in Albert Hall, London, on Dec. 1, 1906, and actually sang again in the same hall at a Red Cross benefit on Oct. 20, 1914, when she was 71 years old.

Patti was uninteresting as an actress, but she had a superbly controlled voice of very wide range, perfect evenness, and extraordinary flexibility. Not musically very gifted, she conquered entirely by the beauty, ease, and agility of her vocal production. Her personal life was much discussed, as she was married thrice: in 1868 to the Marquis de Caux, whom she divorced in 1885; in 1886 to the French tenor Ernesto Nicolini (stage name of Ernest Nicolas), who died in 1898; and in 1899 to the Swedish Baron Cederstrom, a naturalized British subject, who survived her. In February 1906, Patti made a series of notable phonograph recordings at Craig y Nos, her castle in Wales.

Her sister, was born in Florence, Italy. Her father and mother taught her singing and she had piano lessons in Paris with the Austrian pianist Henri Herz. Her early youth was spent in New York City. She made a few appearances in opera, but lameness prevented her from having an operatic career. In both the United States and England she was a favorite on the concert stage as a coloratura soprano noted for her fine flexible voice of wide compass and the deep feeling with which she sang. She made her New” York debut in 1861 and her London one in 1863. She married the Belgian cellist Ernest de Munck (1840-1915), with whom she toured in concerts. She later taught singing in Paris and died there.

Their brother, was born in Madrid, Spain, and taken to the United States as a child. A violinist and conductor of some repute, he was concert master of the New Orleans Opera at the age of 20, and later conducted opera in New York City and at the Wakefield Opera House in St. Louis, Mo. He died in St. Louis.