What are Adam Smith’s ideas on goverment, capitalism, freedom. Information on Adam Smith works and theories.

Adam Smith (1723-1790); Scottish political economist and moral philosopher, whose writings had a profound influence on economic thought. The founder of the classical school of political economists, he is best known for the monumental The Wealth of Nations (1776). This work, which is the preeminent expression of the principles of a laissez-faire economy- or commercial society, as Smith called it-holds that a government should only maintain law and order and impose minimum legal restrictions on trade. 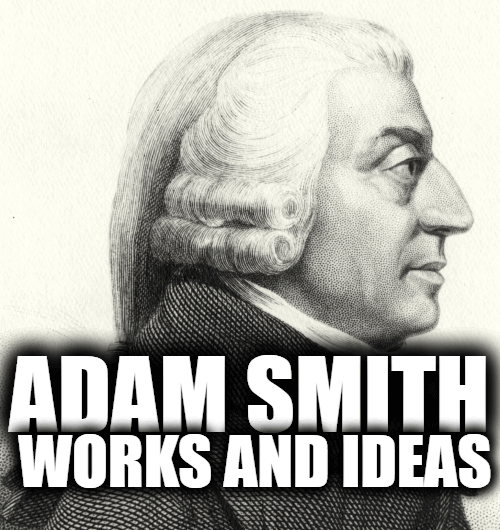 The Wealth of Nations, whose full title is An Inquiry into the Nature and Causes of the Wealth of Nations, begins its argument with a discussion of the division of labor as a principle of production, approving its effectiveness in enhancing the standard of living but criticizing its moral and intellectual effects on the population.

Smith raises the question of the distribution of the product among the people, resorting to what came to be known as the law of supply and demand to explain the level of wages, profits, rent, and of prices generally. In doing this, he separates the discussion of prices and distributive sh ares from the traditional notian of the just-as in the term “just price”-and orients it instead upon the “natural.” Thus the natural price is that dictated by fluctuations in the market. Smith alsa analyzes the history of Europe as a response to the promptings of self-interest or, more generally, as a result of repeated human surrender to sentiment or passion. He does so partly to explain how Europe developed mercantilist capital is m through the feudal Middle Ages and partly to illustrate the mechanism of history for the sake of promoting future progress.

Finally, Smith speaks of public policy with respect to the administration of justice, education, religion, and other problems, all in the section (Book 5) that deals with public expenditure and revenue-“public finance.” 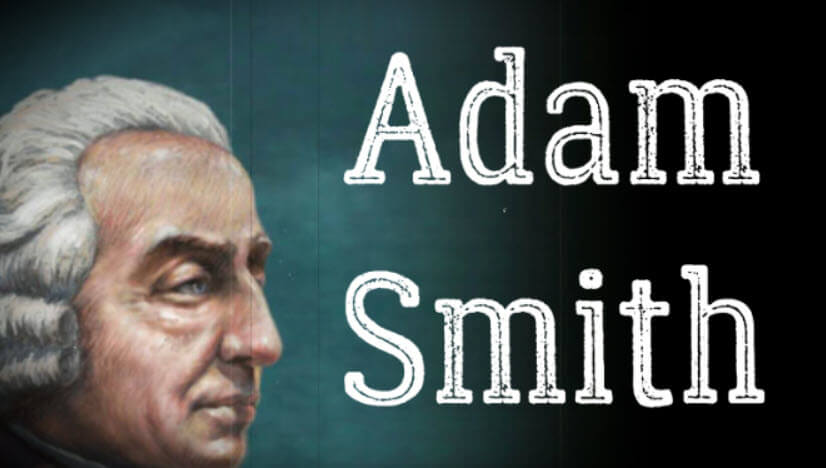 As the expression of Smith’s argument for “liberal capitalism” (a term that he did not use), The Wealth of Nations represents a radical departure from the two most fundamental traditions of European thought-the moral traditions descending, respectively, from Greek philosophy and from the Bible. Taken together, the two traditions may be said to have preseribed for Europeans a life guided by attention to duty, or, in more old-fashioned usage, a life oriented upon various virtues. Thus virtues had their sanction from a doctrine of human nature that has of ten been described as “transcendental,” a doctrine that implies that man must be understood in the light of his loftiest possibilities.

But sustaining this upward orientation, or translating the notion of virtue into the realm of everyday behavior, required the steady exertion of strong authority up on the people. Authority was distributed between the secular and ecclesiastical princes, in accordance with long-standing doubts as to the workability of popular rule. The prevailing view was that the greatest evil that could befall mankind was vice or sin-not political subjection, poverty, or even death itself.

Smith refers to his proposals as “natural,” a term that he uses in a sense that so differs from the “transcendental” that his general rejection of the transcendental tradition is implicit in the difference. As appears from his Theory of Moral Sentiments, a book published in 1759, which contributes a great deal to an understanding of The Wealth of Nations, Smith adopted the view of nature, characteristic of science after the 16th century, which saw all phenomena, including the human, as ultimately reducible to the motion of matter. The conservation of that motion, or, in the case of human beings, the preservation of life, was for Smith the paramount objective of nature. 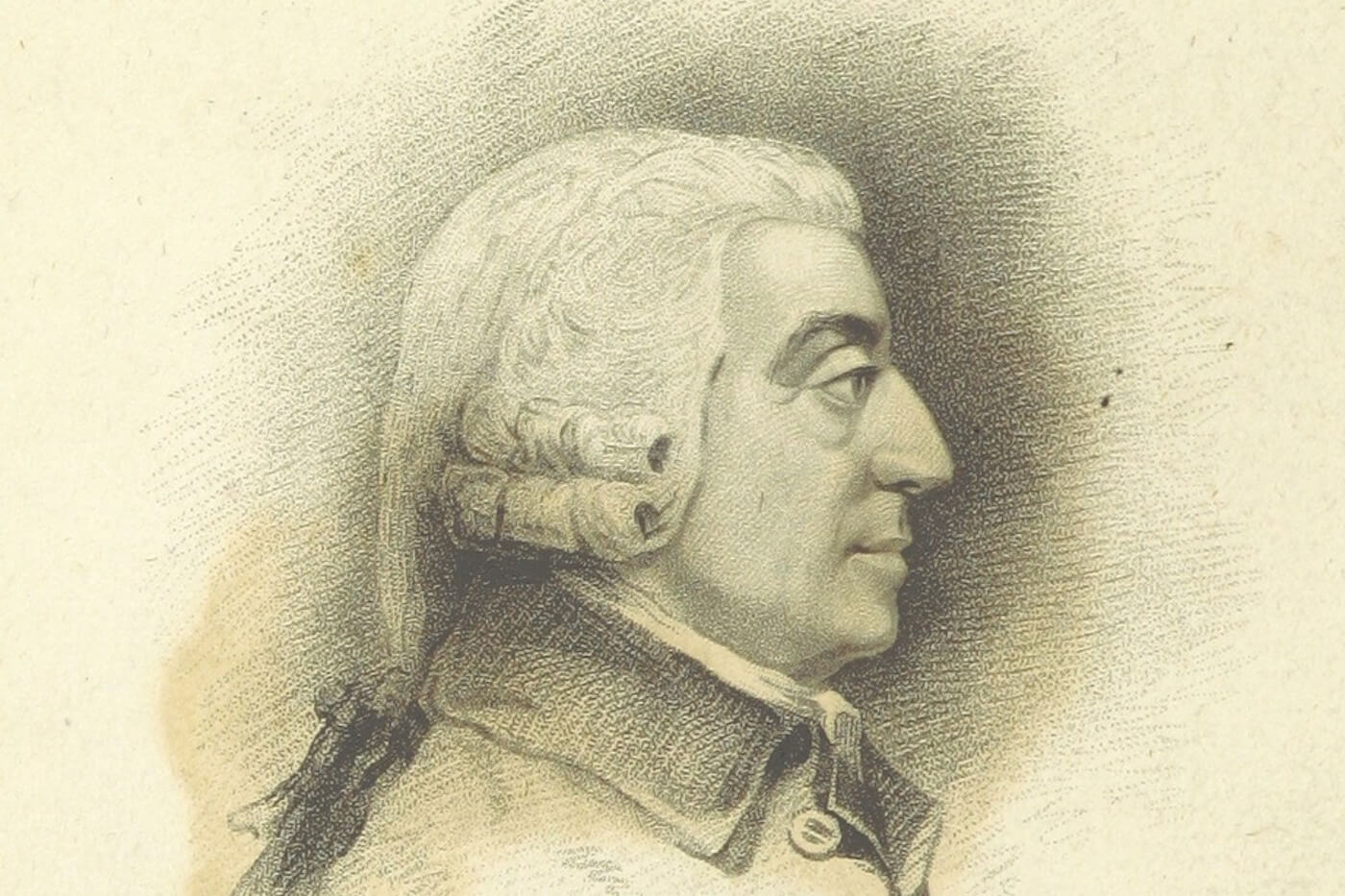 Hence the most natural system is the one that will best organize the production of the things that sustain life. The relatian of the division of labor to high productivity explains why the principle of di vis ian of labor recommended itself to Smith.

His criticisms of it, and of the commercial principle generally, therefore come as a surprise. Those criticisms are delivered from the stand-point of morality in a wide sense: the division of labor had stultifying effects on mind and spirit; single-minded attention to gain was neither noble nar ennobling; and the supply-and-dernand mechanism for distributing the product had an outcome that for Smith was less than perfectly just. Why, then, in view of his powerful reservations conceming the commercial principle, did Smith nonetheless advocate it so effectively as to be acknowledged as its major protagonist?

Liberal Polity the Key to freedom.

A clue to the answer may be found in considering together Smith’s speculations on history, and his discussion of formal political arrangements in Book 5 of The Wealth of Nations. Historical change takes place as men seek to gratify their passian for gain and place. To move the masses of men, it is best to draw them forward with the promise of sufficiency and even superfluity of that which they crave most-the means of life. But in which directian should they be drawn? For Smith, it was in the direction of liberal polity. Liberal polity implies the simultaneous relaxation of the secular and ecclesiastical bonds that the European tradition saw as the indispensable conditions for tolerable life in common.

Smith believed that he had solved the problem of freedom and order by this formula:

Release the people into the custody of their passions-from which nothing can emancipate them in any case-and, with appropriate institutional limits to contain their clashings, they will find themselves drawn by self-interest to do what is required for the good of the community. Capitalism is the economic, and inferentially the transeconomic, historical premise of liberal polity -a testimony to the desirability of relying up on internal motives rather than upon external compulsions.

In The Wealth of Nations, Smith draws heavily upon the contributions to natural and political science by philosophers between the 16th and 18th centuries. At the same time, the book epitomizes much, if not all, of the character of Western liberal capitalism and the free institutions that are associated with it. Seen in this light, the work is a powerful, ever-present reminder of the deep sense in which modern life is the reflection of modern thought.