ACIDOSIS, is a condition in which the blood becomes overly acidic and the normal acid-base balance (pH) is not maintained.

It is not a disease in itself, but rather a symptom complex. Normally the pH is 7.4, but in acidosis it approaches the 7.0 mark.

Acidosis is caused by an accumulation of acid or by an excess loss of base (alkali). This condition can arise as a result of a mal-function of one or all of the three acid-base controlling mechanisms in the body. These controls are the blood, whose proteins buffer and combine with acids; the lungs, which give off carbon dioxide and thus prevent the accumulation of carbonic acid; and the kidneys, which conserve bases and produce acidic urine. Acidosis can also develop as a result of certain diseases. For example, in diabetes, there is an accumulation of acid because of the increased use of fats for energy; in certain cases of vomiting and diarrhea, there is an excessive loss of alkali substances. 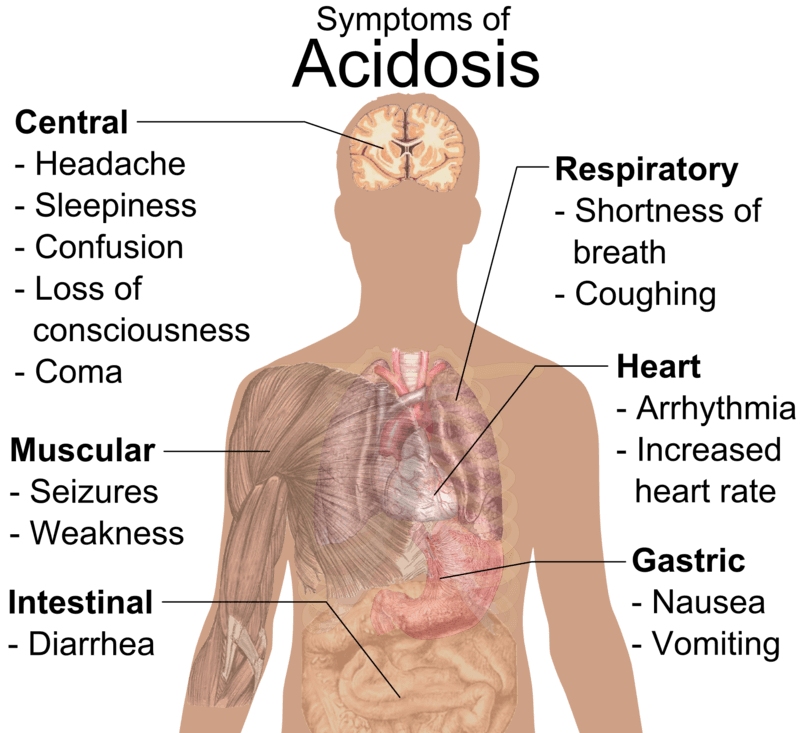 Recognizable symptoms of acidosis usually do not appear until after the condition has been present for a while. The symptoms vary with the cause of the acidosis and may range from lethargy, weakness, nausea, and headache to dehydration, a lack of urine, and a comatose state.

The diagnosis of acidosis is based on chemical determinations of the levels of sodium, potassium, carbon dioxide, chloride, sugar, and urea nitrogen in the blood.

An acidosis state should be corrected quickly. Generally, it is treated by the administration, often intravenously, of fluids and the alkali substances necessary to regain a normal acid-base balance. The underlying cause of the acidosis must also be treated.