ACHILLES, was a legendary Greek warrior, who is the hero of Homer’s lliad. Homer deseribes him as the handsomest and bravest of the Greeks who fought at Troy. Achilles’ destructive wrath is the subject of Homer’s epic. 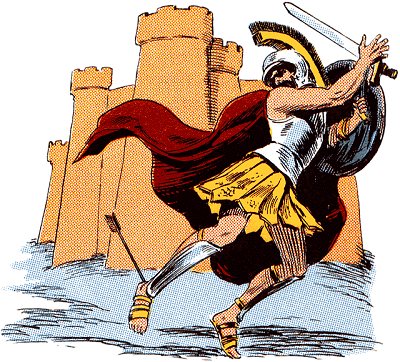 In Greek legend, Achilles was the son of Peleus, king of Phthiotis, and of Thetis, a Nereid (sea nymph). According to Homer, he was educated by Phoenix, who taught him to be both an eloquent speaker and a man of action, and by Chiron, the centaur, who taught him the art of healing. Homer also telis of the choice with which Achilles was faced, between a long, inglorious life and a short, glorious one. He chose the glorious life, and though there are times in the course of the Trojan War when he questions the wisdom of dying for glory, his ultimate choice symbolizes his belief in the heroic code.

As depicted by Homer, Achilles is a complex character, in tense in his love as well as in his hate, intelligent, courageous, and capable of both great cruelty and great kindness. In the lliad, Agamemnon inspires Achilles’ anger by demanding Briseis, a young woman whom Achilles had captured, to replace his own captive Chryseis, whom Agamemnon must return to her father.

Unjustly deprived of his “prize,” Achilles withdraws from the battle and summons his mother, Thetis, asking her to persuade Zeus to aid the Trojans, to indicate to the Greeks how much they need Achilles and make them aware of Agamemnon’s injustice to him. Zeus promises to help her. As a result of the god’s intervention, the Greeks suffer many defeats. Despite Agamemnon’s offer to return Briseis to Achilles and to give him many presents, Achilles refuses to rejoin the Greeks in battle. His wrath has become so obsessive that he does not respond to the pleas of the Greek leaders, Odysseus and Diomedes, or of his own teacher, Phoenix.

Only after his beloved friend Patroclus is killed by Hector, the Trojan leader, does Achilles return to battle. His wrath is now turned against Hector, whom he pursues three times around Troy and then kills. Achilles then ties Hector’s body to his chariot by the feet and drives the chariot around the walls of Troy. Finally, persuaded by Thetis, at Zeus’ command, Achilles returns Hector’s body to Priam. The scene in which Hector’s old father comes to Achilles to ask for his son’s body is one of the most moving episodes in the lliad.

In the lliad, as Hector is dying, he prophesies that Achilles will be killed by Paris and Apollo at the Scaean Gate, and the prophecy is fulfilled. The mourning for Achilles is described in the Odyssey, and in this epic he appears as a shade in the Underworld.

According to post-Homeric legends, Thetis attempted to make the infant Achilles immortal by dipping him in the river Styx. Since she held him by the heel, he remained vulnerable in that part. This story is told for the first time in Statius’ epic poem Achilleid.

Other post-Homeric legends relate that Peleus or Thetis attempted to prevent Achilles’ participation in the Trojan War, where they knew he would die, by sending him disguised as a girl to the court of King Lycomedes, on the island of Scyros. Here Deidameia, one of the daughters of Lycomedes, bore Achilles a son, Neoptolemus. When the prophet Calchas warned the Greek leaders that they could not defeat the Trojans without Achilles, Odysseus and Diomedes went to Scyros and revealed Achilles’ true identity. He then accompanied them to Troy.

Achilles also is an important character in Euripides’ Iphigenia in Aulis.