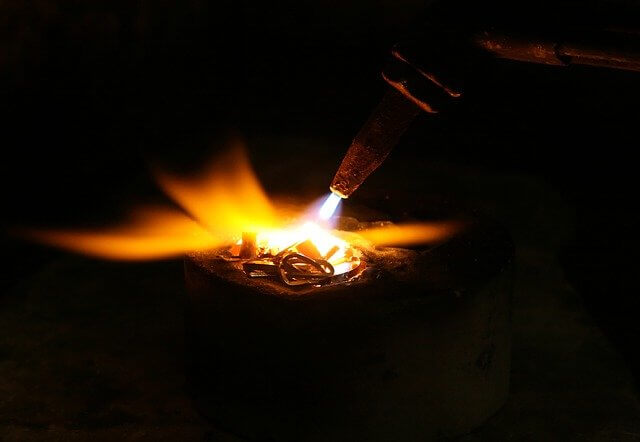 ACETYLENE, also called ethyne, is the first and most important member of a family of unsaturated hydrocarbons called alkynes. It was discovered by Edmond Davy in 1836. The formula,

, indicates its composition and structure. The triple bond between the carbon atoms is the characteristic feature of ali alkynes.

Acetylene is a colorless, flammable gas with a characteristic odor. Under pressure and at low temperatures the gas can be condensed. Acetylene is an energy-rich molecule:

It is potentially dangerous, especially when kept under pressure. Explosive decompositions may be initiated by heat, shocks, sparks, and some chemicals. Safe methods of handling and shipping acetylene have been developed to guard against these hazards. Compressed acetylene is commonly available in steel cylinders containing acetone and a porous solid.

Acetylene became widely available after F.F. H. Moissan, in 1891, developed a large-scale preparation of calcium carbide in an electric furnace. To generate acetylene, the carbide is treated with water.

After world War II the production of acetylene by newer processes became important. In these processes, hydrocarbons from natural gas or petroleum are passed through a furnace at about 1500° C for a fraction of a second:

Before it was displaced by the incandescent lamp, acetylene was widely used as an illuminant. Ordinarily, acetylene burns with a luminous, sooty flame; when mixed in the proper proportions with air or oxygen in a suitable lamp or torch, it gives off intense white light. The oxyacetylene torch, which produces an exceedingly hot flame, is widely used in welding, cutting, and cleaning steel.

The bulk of the acetylene now produced goes into the preparation of other valuable organic chemicals. Some of the important industrial products from acetylene include acetaldehyde, acetic acid, acetylenic alcohols, vinyl esters, vinyl ethers, chlorinated compounds, acrylonitrile, and methyi acrylate. These “small” molecules can be used to build larger molecules in making synthetic fibers, plastics, synthetic rubbers, drugs, plasticizers, adhesives, coatings, and other products.