ABSOLUTE ZERO, or zero degrees absolute, is the lowest temperature on the Kelvin thermometric scale (absolute thermodynamic scale of temperature). 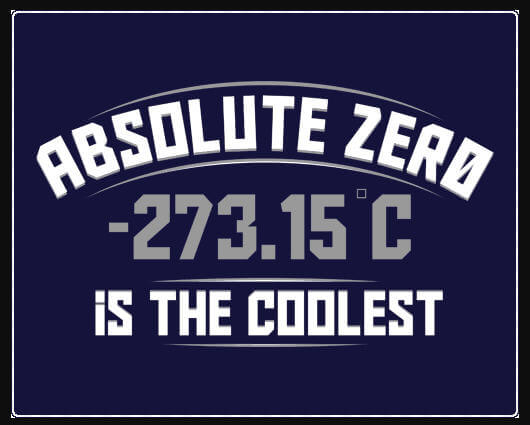 It is the temperature matter would have if ali of the heat were removed from it. Therefore, absolute zero is the lowest temperature possible.

The thermal energy of matter is viewed as the rapid random motion of its molecules, and this energy is proportional to temperature. As the temperature of an object is reduced, therefore, the disordered motions of its molecules become less agitated. In the classical view of nature, molecular motion ceases altogether at absolute zero.

With the advent of quantum mechanics, this classical view required modification. Matter is now thought to retain a zero-point energy of random molecular motion at absolute zero.

Absolute zero is the lowest possible temperature. At this temperature the internal energy level of the system is the lowest possible, so that the molecules, according to classical mechanics, lack movement; However, according to quantum mechanics , absolute zero must have a residual energy , called zero point energy , in order to satisfy Heisenberg’s uncertainty principle . Absolute zero serves as the starting point for both the Kelvin scale and the Rankine scale. Thus, 0 K (or what is the same, 0 R ) corresponds, by definition according to international agreement, to the temperature of −273.15 °C or −459.67 °F.

According to the third law of thermodynamics , absolute zero is an unreachable limit . In September 2014, scientists from the CUORE collaboration at the Laboratori Nazionali del Gran Sasso in Italy cooled a copper vessel with a volume of one cubic meter to 0.006 kelvin ( −273.144 °C ) for 15 days , setting a record for the lowest temperature recorded in the known universe over such a large contiguous volume. The difficulty in reaching such a low temperature in a cooling chamber is the fact that the molecules in the chamber, upon reaching that temperature, do not have enough energy to make it drop further.

The entropy of a pure and perfect ideal crystal would be zero. If the atoms that compose it do not form a perfect crystal, its entropy must be greater than zero, so the temperature will always be higher than absolute zero and the crystal will always have imperfections induced by the movement of its atoms, requiring a movement that compensate and, therefore, always having a residual imperfection.

It is worth mentioning that at 0 K absolutely all known substances would solidify and that according to the current model of heat, molecules would lose all ability to move, vibrate or rotate.

So far the closest temperature to absolute zero has been obtained in the laboratory by scientists at the Massachusetts Institute of Technology in June 2015. It was obtained by cooling a gas in a magnetic field to 500 nanokelvin (5 10 −9 K) above zero. absolute.

When approaching absolute zero, certain phenomena can be produced in some materials, such as the Bose-Einstein condensate , or some superfluids such as helium II .

In 1924, Albert Einstein and the Indian physicist Satyendranath Bose predicted the existence of a phenomenon called the Bose-Einstein condensate. In this state, the bosons are grouped together in the same quantum state of energy. This phenomenon was confirmed in 1995, and since then many of its properties have been investigated.

At temperatures very close to absolute zero, superfluids can be formed , or even fragile molecules that do not exist at higher temperatures for study, among other phenomena.

A practical application can now be found in the LHC particle accelerator at CERN. The Large Hadron Collider (LHC) reaches a temperature of 1.9 K. The experiments that will be carried out in this particle accelerator require the cryogenization of certain circuits to obtain superconductors. This is possible thanks to the combination of helium compressors fed with liquid nitrogen , which enters the circuits at approximately 80 K ( −193.15 °C ) to gradually drop in temperature as it passes through the circuit of the 3 compressors. The lowest temperature reached in the LHC is 1.8 K.