Metalloids or semimetals are a type of chemical elements that show an intermediate behavior between metals and nonmetals, in terms of ionization issues and bonding properties.

It is not easy to distinguish them from real metals, however. It is achieved only through the review of its electrical driving properties. In addition, they are usually very varied in their shape and color. 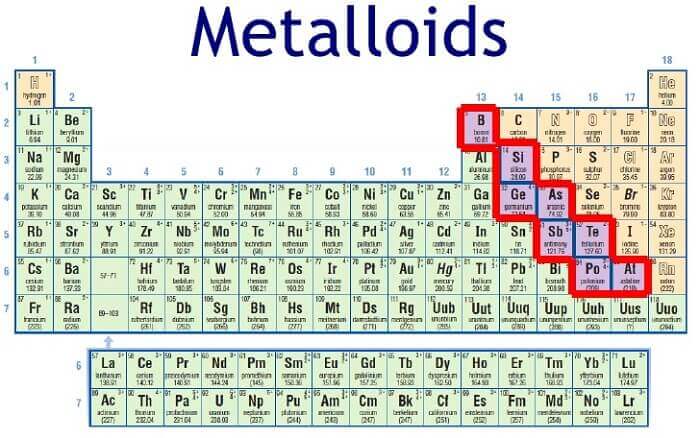 1. Location in the Periodic Table

The metalloids are found, within the Periodic Table, on a diagonal descending from the boron to the astatine, scattered between columns 13, 14, 15, 16 and 17, and dividing the Table into two. The elements that are located in the middle of the right are non-metallic, and those that are located on the left are metallic.

The metalloids are very varied in their shape and color. They can be bright or opaque, and many of them have more than one allotropic state, that is, different presentations according to their molecular structure. Arsenic, for example, can be gray, yellow or black, depending on its allotropic version. Silicon, similarly, can be shown as a shiny solid crystal or as an amorphous and brownish powder.

Most metalloids are semiconductors (they transmit electricity in only one direction) instead of complete conductors and in that they are distinguished from metallic elements. However, they are much better drivers than non-metal elements (insulators), so they are often used in the electronic manufacturing industry.

As with electricity, metalloids conduct heat energy much better than non-metallic elements, without reaching the high conductivity of metals. In general, they are not considered good conductors of heat.

Given their intermediate condition, the metalloids react differently depending on whether they are in the presence of a metallic element (then react as a non-metal) or a non-metallic element (then react as a metal). They have an affinity for different elements, depending on each one, and that is why they are usually found in minerals along with them, such as uranium, lead, sulfur, etc.

Although some metalloids, such as arsenic, are indispensable for the formation of vital molecules and are found in the bodies of living beings, they may represent a danger to health.

Boron or arsenic poisoning itself (highly toxic) can be lethal; and polonium, on the other hand, is a toxic and highly radioactive element, that is, it emits alpha particles that are harmful to health, as they are potentially carcinogenic, immunosuppressive and mutagenic.

Most metalloids are usually shown in the solid state at room temperature, either in the form of crystals (such as arsenic) or opaque and brittle blocks (such as germanium). However, some have curious properties in terms of phase change. For example, arsenic passes directly from solid to gas (sublimation) in the presence of heat (and at normal atmospheric pressures).

Some metalloids are extremely abundant in the earth’s crust, such as silicon, which forms numerous compounds called silicates, or arsenic as well. Boron, on the other hand, exists abundantly, but as part of the mineral called borax, since it does not exist in a free and pure state in nature. Polonium, on the other hand, is quite rare and appears only as part of certain uranium minerals; and antimony is found in very small percentages in the earth’s crust.

Most semimetals are used for the manufacture of electronic devices and semiconductor elements, such as rectifiers, transistors, diodes, integrated circuits or even, as in the case of silicon, chips and microprocessors. However, their variety enables them for many different uses.

For example, some isotopes of Boron are useful in the absorption of neutrons within nuclear power plants, functioning as well as mechanisms of regulation of atomic reactions.